Here are some interesting facts about him in celebration of his 72nd birthday. President Trump blows out the candle on his birthday cake as the US and Singapore delegations celebrate his birthday during a working lunch at the Istana, Singapore. 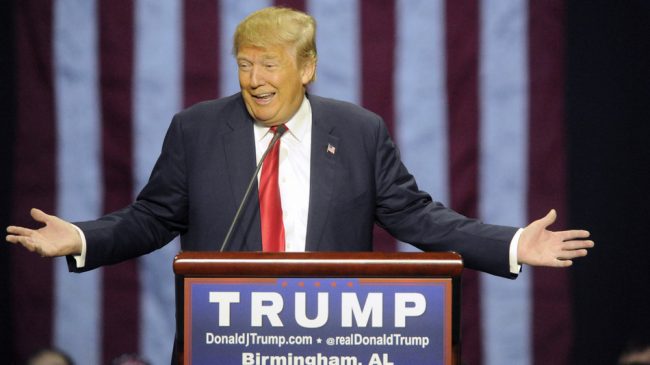 1.He once punched his teacher in the face In his book

The Art of The Deal, Donald revealed: ”In the second grade I actually gave a teacher a black eye — I punched my music teacher because I didn’t think he knew anything about music and I almost got expelled.

2. Once upon a time, President Trump admired Hillary Clinton

Speaking in 2012, Trump said: “Hillary Clinton, I think, is a terrific woman… She really works hard, and I think she does a good job.” Evidently, he is speaking a different tune now. During his presidential campaign, he said: “Hillary Clinton was the worst secretary of state in the history of the United States.”

3. He is an expert on working missiles

The United States’ 45th president was once quoted as saying”It would take an hour and a half to learn everything there is to learn about missiles. I think I know most of it anyway.”

President Trump is actually a germaphobe (a person with an extreme fear of germs and an obsession with cleanliness) and avoids a situation where he has to come in bodily contact with another person. However, in recent times, his ‘special’ presidential handshake has become a subject of public debates.

5. He once had a vodka brand that failed

He launched a vodka brand in 2007. A US vodka distributor said: “We’ve had it in stock for five years. It’s never sold. But now that he’s running for president we thought we have a chance to get rid of the vodka… but [still] no one wants to pay for it.”

6. He does not drink/smoke

His personal doctor once said Trump “will be the healthiest individual ever elected to the presidency,” adding that he “has no history of ever using alcohol or tobacco products.”

7. He won an award as the worst actor in a film

Trump won the worst supporting actor’ Razzie award for his role in the 1989 film ‘Ghosts Can’t Do It’.

8. He is worth a lot According to Forbes’ Real Time Net Worth

9. His game house has been the site of many crimes

A ‘Trump’ board game was released in the 80s and the smallest denomination of money in this classic game was $10million.

11. He has a star on the Hollywood walk of fame

Trump was given a star on the Hollywood walk of fame in 2007 for his work on his reality-television show, “The Apprentice.” Trump joined Ronald Reagan as the two US presidents with stars on the Hollywood Walk of Fame; the celebrated sidewalk in California that honours more than 2,500 notable achievers in the entertainment industry.

13. The first sitting US president to meet with North Korea’s leader Kim Jong-un

Trump was in Singapore between Monday, June 11, and Tuesday, June 12 where he became the first sitting US president to meet with Kim or anybody in his family, which has ruled over North Korea for decades. Trump and Kim discussed the need for North Korea’s nuclear disarmament at the summit.