Miss Dolapo Makunjuola who’s a student of Estabam Montessori School, Mile 12 was among the 37 contestants that took part in the 9th edition of the pageant organised exclusively for virgins between the ages of 16 years and above. 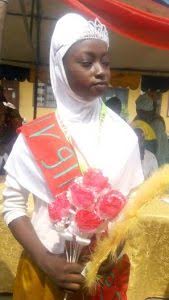 Adeyeye Marian, a 22-Year old student emerged the First Runner up while Oladeji Boluwatife, another secondary school student got the position of Second Runner up.
In her remark, Miss Makunjuola thanked the organizers of the pageant, saying that she is glad to identify with the virgins initiatives. 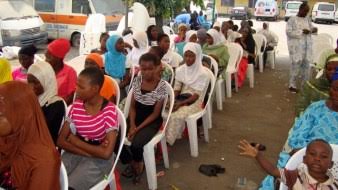 “I am very happy winning this Pageant. I thank everyone who is here and also the organizers, particularly, Princess Adediran Adunni who is the brain behind the success we had here today. Thanks all”.
The beauty pageant was put together by the The Virgins, a Non Government Organisation (NGO) with focus on keeping and celebrating virgin girls in Nigeria.
Speaking shortly after the pageant, Founder and National coordinator of The Virgins, Princess Adediran Adunni thanked all the dignitaries present for their support and attendance.
Princess Adediran said that the pageant was supposed to hold on the 16th December, 2016 but was postponed to January because of financial crunch. She pointed out that if they get good sponsors with joint efforts from the public, parents, government, churches and international bodies the pageant would take a better shape.

Ms. Adediran said she had sent text messages for financial assistance to 200 Nigerians asking for N2,000 each. Out of the 50 churches she approached for assistance, only Anthony Okojie, the archbishop of the Catholic Church in Lagos, gave his support.

“Only 20 people responded out of the 200 people I appealed to,” she said. “But God assisted me further and a Chief of Staff who I will not mention his name for now sent the sum of N50,000. A female lawyer also sent the sum of N10,000. The actual amount to appreciate virgins is, however, somehow countless.”

Speaking further, Adediran advised well placed Nigerians to come out and support the Virgin’s initiative. She also advised young ladies to keep their virginity intact till they get married.
Loading...