The Fulani are a group of northern Nigeria pastorals. They are nomadic in nature because they move over vast lands and cover across many cultures. This peculiar tribe is know by different names, they are called Peul in Wolot, Fulani in Bambara, Felaata in Kanuri, and Fulani in Hausa.

Origin. History says that the origin of the Fulani started from Arabian Peninsula in 1945, and they migrated south-west to Senegambia. From there, they moved eastwards, crossing Sahelian and Sudanian Zones, to the Red Sea in 1981. This is thus said to be the reason for their occupational and bio-genetic characteristics; light skin with curly hair, pointed nose, thin lips, and slim statute. Population Growth. The Fulani tribe hardly use artificial birth control, due to this reason, fertility in their region is very high exceeding the number of deaths. In the absence of migration data, this research relies on fertility and mortality records to estimate population growth of the Fulani. 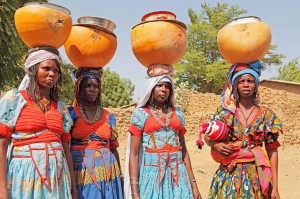 Marriage. This group of people called the Fulani are endogamy in nature, marrying from one cross-and parallel-cousins, or from clan members. Endogamy is breaking fast, and the Fulani are increasingly having marital relationships with other ethnic groups, especially with the Hausa with whom they share a common religion. Religious more than cultural differences are the main barrier to inter-ethnic marriages with the Fulani.

Morbidity and Mortality. The criteria used to measure morbidity and mortality (longevity) in this sample of Fulani are health status, number of live births, number of deaths in one year, and the ages of the mothers. Education is not used as an index because the corresponding data for cross-tabulation have not been included in the research design.

Though the Fulani are a people with distinctive physical features similar to the people of Egypt, northern Sudan, and Ethiopia, their home still remains northern Nigeria in West Africa.