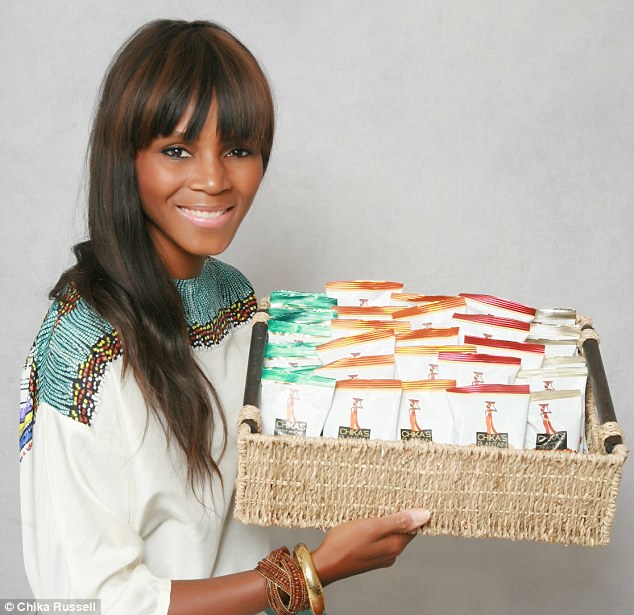 Nigerian Mother-of-two who rejected investment on Dragons’ Den, has revealed how she built a 1million snack business in UK – inspired by her childhood in Anamabra state, Nigeria.
Speaking during her appearance on the hit BBC2 show, 31-year-old Chika Russell, a ‘mean cook’ from London who turned down a £30,000 investment from Dragons’ Den panelist, Peter Jones has disclosed how she’s gone one to forge a burgeoning food business on her own.
The mother-of-two managed to tame the business magnate with her line of Nigerian-inspired healthy snacks as she however later decided to go it alone because she wanted more of a ‘challenge’ and it appears her risky decision is now paying off, with Waitrose and Whole Food’s among her stockists.
Explaining her decision to cut ties with Peter Jones after wowing all five judges on the show, Chika, who is married with two children, Chialuka, (4), and Zanni, (3), said at the time:
‘I really wanted Peter Jones because of what he did with Reggae Reggae Sauce, but so much happened in the six weeks of due diligence. I hadn’t called it a business before. [Then I was] able to say: “I have belief in myself,”she said.

Currently there are eight different products in the Chika’s range.
With a newfound confidence, Chika decided to go solo. ‘I really wanted a mentor for guidance and partnership, and to help grow the business.
‘I wanted someone who had been there and made the mistakes. Waitrose were coming on board and Boots had expressed an interest. I thought: “This could be global”.
‘But I like a challenge, and felt if I had Peter Jones on board, then if Sainsbury’s showed interest I would have thought it was due to him. It wouldn’t be as rewarding.’
The former investment banker, who left the City after having children, added launched her firm, Chika’s, in 2014, first stocking products at the Hotel Café Royal in Central London.
Her products – which include hand cooked plantain, chickpea crisps and nuts – are inspired by the flavours she experienced as a child, while spitting her time between London and a small village in Anambra State, Nigeria.

Chika revealing her products in a BBC programme
Revealing her inspiration, the mother-of-two told FEMAIL: ‘These are the foods of my childhood in Nigeria and I wanted people in the UK to experience the same great flavours that I got to enjoy growing up.’
Chika started by rustling up snacks in her kitchen and testing them on friends and family. She then went about refining the flavours based on feedback.
In a flamboyant and bold pitch to the Dragons five months ago featuring African dancers, Chika asked for £30,000 for a 5% stake in her business, telling them: ‘These are the foods of my childhood.’
She revealed how the products were already stocked in 150 outlets in the UK in just a year. ‘I know what I’m doing. I’m already doing it – but I can do it better. And with your partnership, Chika’s can become an even more sucessfull business and brand.’

Describing the ethos of www.chikas.co.uk, she said: ‘Our products are super nutritious. All of our products are made from simple wholesome ingredients. Plantains, almonds, cashews, chickpeas and peanuts individually form the basis for our entire range.
‘Nothing made in a lab and so you get products as nature intended with a little help of my creative side.’
Currently there are eight different products in the Chika’s range and there are plans to expand the offerings further. ‘Expect something sweet and something spicy and something zesty,’ the entrepreneur revealed.
Russell now has her sights set on growing her £1 million turnover. ‘The first sale is not difficult – it’s whether you get repeat purchase and thankfully we do.
‘We know our products sell well because our retailers keep re-ordering and give us great locations within their stores. We have amazing things planned for the future.’
Source: Dailymail UK
Loading...