Within only a few months, COVID-19 has provoked a massive demand shock, setting off job losses that far exceed the scale of the Great Recession a decade ago.

The world will need a broad economic recovery that will require in part the development of new skills among a substantial part of the global workforce.

According to Microsoft calculations, global unemployment in 2020 may reach a quarter of a billion people.

It is a staggering number. The pandemic respects no border.

In the United States alone, Microsoft said, the Congressional Budget Office estimates the country may witness a 12.3 point increase (from 3.5% to 15.8%) in the unemployment rate, equating to more than 21 million newly out-of-work people. Many other countries and continents face similar challenges.

What are the problems? 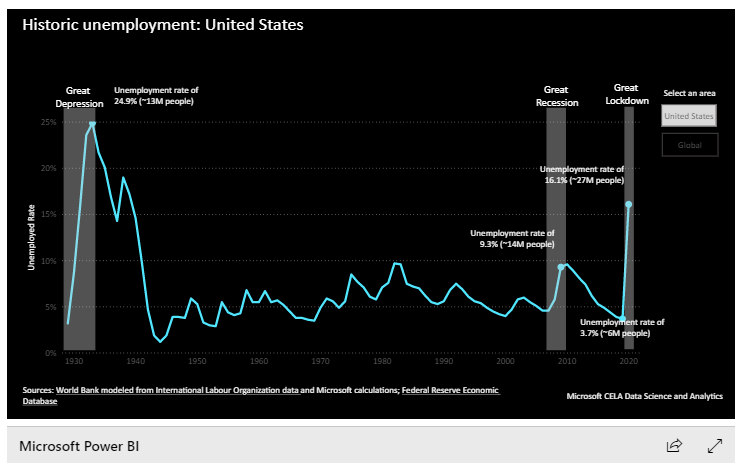 As is often the case, the biggest brunt of this downturn is being borne by those with lower educational attainment, people with disabilities, people of color, women, younger workers, and individuals who have less formal education.

The impact on communities of color in the United States is especially concerning. Just last month, the Bureau of Labor Statistics confirmed that the country ended the month of May with unemployment rates in the Black/African-American and Hispanic/Latino communities that were markedly higher than for white individuals.

The employment of American women has also been impacted disproportionally by the COVID-19 pandemic.

Unemployment rates among women, which have hovered with or edged below men’s unemployment rates, soared to more than 16%, almost 3 percentage points higher at the April peak.

The pandemic has shined a harsh light on what was already a widening skills gap around the world – a gap that will need to be closed with even greater urgency to accelerate economic recovery.

“This longer-term disconnect between supply and demand for skills in the labor market appears to be driven by three primary long-term factors:

(1) the rapid emergence of AI-powered technologies that are propelling a new era of automation;

(2) the growing need for technological acumen to compete in a changing commercial landscape; and

(3) the drop-off in employer-based training investments over the past two decades. Navigating these challenges to close the skills gap will require a renewed partnership between stakeholders across the public, private, and nonprofit sectors.

“As we look to the future, we can draw insights from recessions in the past. Although recent recessions differed in their causes, each followed a trend of shedding low-skilled jobs and gradually replacing them with less automatable roles. In the late 1960s, roles that involved repetitive tasks involving manual work made up 34% of all jobs. These have been easier to automate, and as a result these jobs have now shrunk to 26% of all jobs. By contrast, jobs involving heavy cognition and problem-solving have simultaneously risen from 22% to 34%.

This pattern is poised to repeat itself, with an added emphasis on a jobs recovery that requires an increasing focus on digital skills.

“There are two reasons this appears likely. First, in the shorter-term COVID-19 will continue to lead to unprecedented reliance on digital skills. In many situations, some workers may spend several months or longer in a ‘hybrid economy,’ where some will be in the workplace while others continue to work from home.

“The shorter-term ‘hybrid economy’ is a more digital economy. With continued consumer and employee reliance on almost ‘remote everything,’ we can expect digitization of the economy to continue to advance at an accelerated speed. And as companies respond to a recession by increasing efficiency, this need for digital transformation will increase even further.

“Second, the economic recovery will take place amid the longer-term and already-unfolding wave of automation based on the new technologies that underpin what some have called the Fourth Industrial Revolution. Over the next five years, we estimate that the global workforce can absorb around 149 million new technology-oriented jobs. Software development accounts for the largest single share of this forecast, but roles in related fields like data analysis, cyber security, and privacy protection are also poised to grow substantially”, “Microsoft said.

Of course, the magnitude and mixture of job growth will vary by country, industry, and sector.

Although the impact will not be distributed evenly, digital transformation will touch virtually every corner of the global workforce — from food production (324,000 new jobs) to healthcare (2 million) and the automotive industry (6 million).

“All this is made more urgent because of a challenge that has been two decades in the making, namely the decline and then stagnation in employer investments in training. Employer investments in training grew substantially throughout the 1980s and 1990s, as personal computers and the internet reshaped the world’s workplaces. This trend ceased around the turn of the century, as the dot-com recession and 9/11 marked the start of a nearly decade-long decline in employer-based investment in training.

“Since 2008, the downward trend in employer-paid training has given way to a decade of stagnation, both in North America and around the world – notwithstanding a small spike in the wake of the Great Recession. Alarmingly, the trend of the past few years appears to be slightly negative. This contraction occurred despite the fact that the U.S. economy, which accounts for just under half of the global training market, was enjoying an unprecedented period of growth, and technological advances were beginning to reshape the modern workplace yet again.

“Exacerbating the challenge is the fact that existing training is not reaching the populations who need it most. On-the-job training far outpaces distance learning and other alternative modes, limiting options for prospective employees. Perhaps more significantly, on-the-job training is more than two times as prevalent among workers who are already in higher-skilled roles, leaving those in more automatable positions even more vulnerable to displacement.

“Digital technologies will be key to narrowing the divide, not only because they can expand the reach and accessibility of training, but because proficiency in these tools is in top demand. In a recent survey of American workers by Pew Research Center, for instance, 85% of respondents cited digital skills as either extremely important or very important to succeeding in today’s workplace.

“But technology is only a means to an end, not an end in itself. The same Pew survey also observed that 85% of respondents regarded “soft” skills like collaborating with others and communicating effectively as highly important. In other words, people-oriented “success skills” remain as essential as ever – perhaps even more so given their durability at a time when technology continues to evolve at breakneck speed. Although technology companies have an important role to play in helping close the skills gap, success will take a concerted effort among employers, nonprofits, governments, and other stakeholders. The task calls for renewed partnerships and redoubled investments in skills, ensuring that training reaches the broadest group of people with the greatest needs.

A principled approach by Microsoft

“As we have with our work to protect privacy, security, and environmental sustainability, we’ve concluded that the global skills challenge calls for a principled response. As a company, we’ll base our efforts on six key elements:

1. Use data and technology to help people develop new skills. The fastest and most economical way to address the skills shortage is to put technology to work to skill more people faster, starting with digital skills themselves. We’ll use data to identify the skills most in demand and the people who need help the most.

2. Focus on a broad set of skills. Even while we focus on tech-enabled jobs, we’ll work to support the development of broader skills as well, including the acumen needed to ensure the responsible use of technology and the soft skills needed to find and succeed in a new job.

3. Ask employers to do more. We believe that employers will need to play a bigger role than in recent years in helping employees develop these new skills. As an employer ourselves, we will make new training commitments to our employees. And we will help empower our customers so they can better meet the needs of their own employees.

4. Lean on partners. As in so many other important areas, partnerships are fundamental. We will base our work on partnerships with nonprofits and support for governments. And we will focus our support for nonprofits, in particular, on providing added assistance to the people who need this help the most, including communities of color in the United States.

6. Use our voice to change policy. As we learn what helps people most, we will share our data and knowledge and advocate for public policy innovations to support reskilling opportunities.

What the Company has launched

“Today’s global skills initiative is based on months of planning across Microsoft to provide meaningful help to 25 million people globally by the end of 2020.

“Our activities will be focused on three areas:

Data and analytics to better understand in-demand skills and jobs

The Economic Graph is a digital representation of the global economy based on more than 690 million professionals, 50 million companies, 11 million job listings, 36,000 defined skills, and 90,000 schools.

In short, it is all the data on LinkedIn and shows available jobs, their required skills, and the existing skills job seekers have.

These insights help connect LinkedIn members to better opportunities and assist governments and organizations as they create economic opportunity for the global workforce.

This data can be accessed using a new interactive tool at linkedin.com/workforce. Data is available for more than 180 countries and regions (150+ cities, 30+ countries). Users can search by country or region and download the data sets.

“We have also used the Economic Graph as a critical planning resource for today’s skills initiative, by identifying the key jobs and horizontal skills that are most widely in demand and creating learning paths for these via LinkedIn Learning. Using this data, we identified 10 jobs that are in-demand in today’s economy and are well positioned to continue to grow in the future.