Davido shared a video on his Instagram page of a band performing his hit song, “IF”.. and he captioned it: “BIGGEST SONG ON THE CONTINENT!!!! CLEAR D HIGHWAY!! NAH MEN DEY HERE!!! MY BOYS @compozers KILLING IT !!”

After, a follower jumped on the post to criticize the DMW boss, the follower worte: “very wack concert and low turn up” and another follower quite agreed with him, he wrote: “..and he is still deceiving himself and others”.

Immediately Davido saw this, and came for both critics., he wrote: “Dumb bitch! Wasn’t even my show. you see me there?? stewpid.”

Follower replied: “I am an official and administrator at TX. I deserve some respect here. Spoilt boi spending daddy’s money.”

And Davido gave the final blow: “That joke ain’t funny no more! many artist papa get money when dem no blow! I have Gods grace.. I came in this game 2011 and I’m still here going strong! Money can’t buy that! And you deserve no respect cus youre an insecure fool that comes on another mans page talking shit that’s not even true u fuck boy. Now unfollow me please I have 3.9million other followers to entertain.. my unborn daughter’s future bright pass ur own and she’s not even hear yet! Fool! 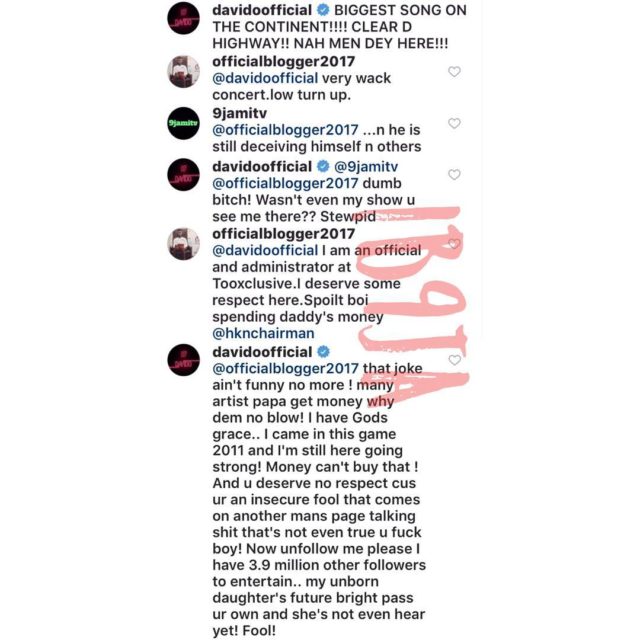