Nigeria is one of the most populated country in Africa, with a population of about 182 million in 2015. Nigeria is equally divided between Christianity and Islam, although the exact proportion is uncertain. the number of non religious Nigerians is growing as well, it was accounted to be about 5%. Majority of Nigerians Muslims are Sunni and are mostly found in  the northern part of the country. 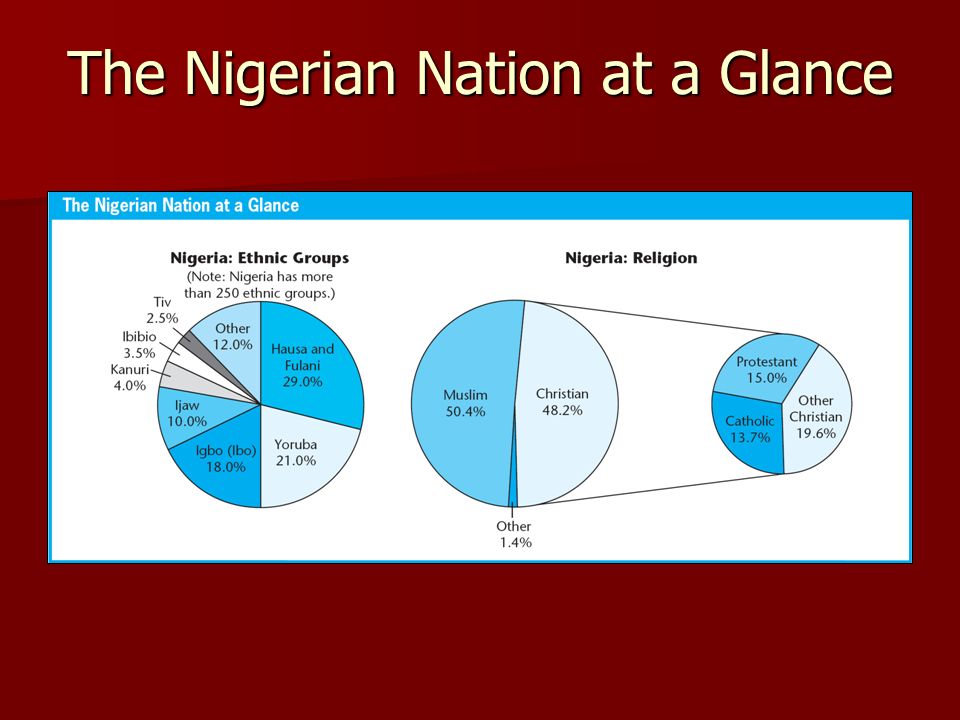 Most of Nigeria’s Christians are Protestant (broadly defined) though about a quarter are Catholic. From the 1990s to the 2000s, there was significant growth in Protestant churches, including the Redeemed Christian Church of God, Winners’ Chapel, Christ Apostolic Church (the first Aladura Movement in Nigeria), Deeper Christian Life Ministry, Evangelical Church Winning All, Mountain of Fire and Miracles, Christ Embassy, The Synagogue Church Of All Nations, The CommonWealth Of Zion Assembly (COZA), the Aladura Church (indigenous Christian churches being especially strong in the Yoruba and Igbo areas), and of evangelical churches in general. These churches have spilled over into adjacent and southern areas of the middle belt. Denominations like the Seventh-day Adventist also exist.

Other leading Protestant churches in the country are the Church of Nigeria of the Anglican Communion, the Assemblies of God Church, the Nigerian Baptist Convention and The Synagogue Church Of All Nations. The Yoruba area contains a large Anglican population, while Igbo land is predominantly Catholic and the Edo area is predominantly Assemblies of God, which was introduced into Nigeria by Augustus Ehurie Wogu and his associates at Old Umuahia.

Islam dominated the north and had a number of supporters in the South Western, Yoruba part of the country. Nigeria has the largest Muslim population in sub-Saharan Africa. In terms of Nigeria’s major ethnic groups’ religious affiliations, the Hausa ethnic group in the North is mostly Muslim, the West which is the Yoruba tribe is divided among mainly Islam, Christianity, and traditional religions, while the Igbos of the East and the Ijaw in the South are predominantly Christians (Catholics) and some practitioners of traditional religions. The middle belt of Nigeria contains the largest number of minority ethnic groups in Nigeria and they are mostly Christians and members of traditional religions with few Muslim converts.

The vast majority of Muslims in Nigeria are Sunni, belonging to Maliki school of jurisprudence; however, a sizeable minority also belongs to Shafi madhhab. A large number of Sunni Muslims are members of Sufi brotherhoods. Most Sufis follow the Qadiriyya, Tijaniyyah and/or Mouride movement. A significant Shia minority exists (see Shia in Nigeria). Some northern states have incorporated Sharia law into their previously secular legal systems, which has brought about some controversy. Kano State has sought to incorporate Sharia law into its constitution. The majority of Quranists follow the Kalo Kato or Quraniyyun movement. There are also Ahmadiyya and Mahdiyya minorities.