Gross federally-collected revenue fell by 36 per cent or N1.46tn below the quarterly budget estimate in the first quarter of 2020.

The Central Bank of Nigeria disclosed this in its quarterly report titled “Federation account operations,” obtained by our correspondent on Tuesday.

The report said, “At N2.53tn, federally-collected revenue, in the first quarter of 2020, was lower than the quarterly budget estimate of N3.95tn by 36 per cent.

“Similarly, it fell below the receipt in the preceding quarter by 4.8 per cent.

“The decline in federally-collected revenue (gross), relative to the quarterly budget estimate, was attributed to shortfalls in receipt from both oil and non-oil revenue components during the review period.”

Gross oil receipt, at N1.52tn or 60.3 per cent of the total revenue, was below the quarterly budget estimate and the receipt in the preceding quarter by 31.2 per cent and 2.6 per cent respectively.

The decline in oil revenue, relative to the quarterly budget estimate, was due to shortfall in receipt from PPT and royalties.

It also fell below the level in the preceding quarter by eight per cent.

The lower non-oil revenue, relative to the quarterly budget estimate, was due to the decline in receipt from VAT and corporate tax. 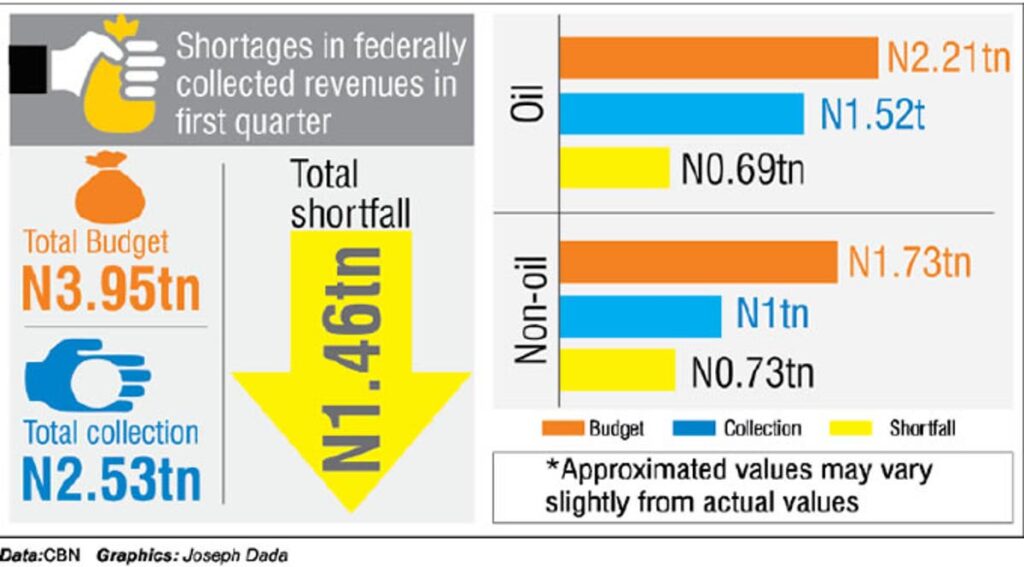 After the statutory deductions and transfers of N523.69bn and N479.1bn respectively, a net sum of N1.52tn was retained in the federation account for distribution.

Of this amount, the Federal Government received N729.63bn, state and local governments received N370.08bn and N285.32bn respectively, while the balance of N139.47bn was transferred to the 13 per cent derivation fund for distribution among the oil-producing states.

In addition, the Federal Government received N44.52bn, while the state and local governments received N148.39bn and N103.87bn respectively from the VAT pool account.

The report added that there was 13 per cent derivation fund of N2.32bn.

It stated that N0.66bn was shared as non-oil excess revenue and was distributed such that the Federal Government got N0.35bn; state governments got N0.18bn, while local governments received N0.13bn.

The total statutory and VAT revenue allocation to the three tiers of government in the first quarter of 2020, amounted to N1.84tn, compared with the quarterly budget estimate of N2.98tn.