According to reports from Papertalk.ng, one of Nollywood’s most loved comic actors, Osita Iheme, is set to walk down the aisle soon.

His bride to be is reportedly a Ghanaian actress known as Nana Ama Mcbrown, who he was spotted with a beach recently. 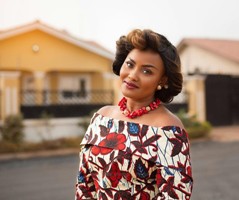 According to reports, the pair have opted to have a secret wedding, away from the prying eyes of the public. This is coming years after his on screen half, Aki (Chinedu Ikedieze), got married to his sweetheart, a Mass Communication graduate/Fashion designer.

Looks like the 33-year-old actor who has over 100 movies under his professional belt, has finally decided to start his own family after all.