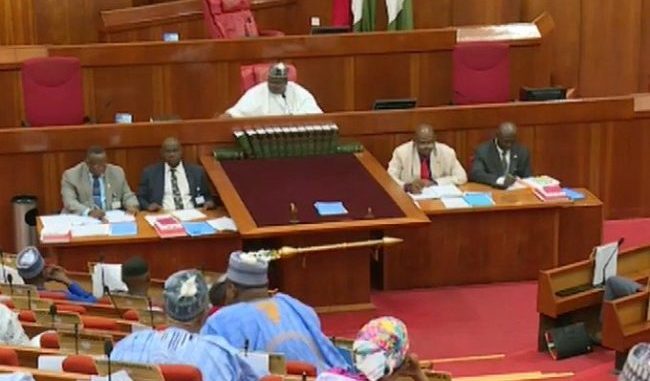 • Senate yet to get medium-term expenditure framework
• Vows action on petroleum bill, insecurity
• Experts disclose ways to improve nation’s fiscal plan
The Senate yesterday said it was yet to receive a draft copy of the Medium-Term Expenditure Framework (MTEF) from President Muhammadu Buhari, despite provisions of the Fiscal Responsibility Act mandating the president to submit the document four months to the end of the year.

The announcement, which was made by Senate President Ahmad Lawan as lawmakers resumed from their end-of-session recess, suggests the ‘delay bug’ could cripple the fiscal document as in previous years.Section 11 of the Act clearly stipulates: “Not later than four months before the commencement of the next financial year, (the presidency shall) cause to be prepared a Medium-Term Expenditure Framework.”

The same Act in Section 18 requires that “the MTEF shall be the basis for the preparation of the estimates of revenue and expenditure required to be prepared and laid before the National Assembly under Section 81 (1) of the Constitution.”After an executive session that lasted over an hour, Lawan announced that the Senate had resolved to wait for the submission of the document by the president.

Lawan had in anticipation of a prompt submission of the document promised last Friday that the first major work of the Senate upon resumption would be considering and approving the MTEF.Failure to comply with the dictates of the Fiscal Responsibility Act with regard to timely presentation of the MTEF has been one of the core obstacles against the country’s budgeting system.

The current 2019 budget suffered the fate of a very late enactment because of the inefficiency that marked the processing of its MTEF. Although the law stipulates that the MTEF/FSP be sent to the National Assembly for ratification at least four months to the end of the year, the president only complied November 6, 2018 while he presented the budget December 19, 2018.

The MTEF/FSP was supposed to have been passed before the appropriation bill was presented. Consequently, some observers of the country’s budgeting system have expressed concern that the Federal Government is gradually making the MTEF/FSP less relevant.

Findings show that since Buhari assumed office in 2015, he has consistently presented the budget to the National Assembly while lawmakers are still considering the MTEF/FSP, indicating what analysts say is a flagrant violation of the Fiscal Responsibility Act.

“This has been the case for the past three or four years. The relation between the MTEF and budget has broken because you are supposed to consider and pass the MTEF before considering the budget. We are beginning to see a pattern in which the MTEF is becoming irrelevant,” said Ogho Okiti, chief executive officer of consulting firm, Time Economics.

Austine Aigbe of the Centre for Democracy and Development (CDD) described the development as unhealthy for the economy, noting that the best way to avoid simultaneous consideration of the MTEF/FSP and the national budget is for the executive to comply with the Fiscal Responsibility Act.“The challenge with the Nigerian budget is priority. When a policy that is supposed to be used to guide the process of budget is taken side-by-side with the budget, then we lack the impetus to properly implement the budget. We need to prioritise issues. And I think it is important we start now.

“The question is, if it is legal that the MTEF guides the preparation of the budget, it means that the MTEF must be ready before the budget.And when it is not happening, then we have a challenge. It therefore means that the budget is an imaginative work that is not guided by the provisions of the Fiscal Responsibility Act, 2007,” said Aigbe.

In a related development, the Senate yesterday rekindled hope on the passage of the Petroleum Industry Bill (PIB), which has suffered setbacks since 2008. The Eighth Senate, according to Lawan, would do all within its powers to ensure it succeeds. “Our priority is to have an oil industry that is functional and productive in a fair, just and transparent environment,” he said.

On insecurity, Lawan said: “The eighth session of the Senate set up an ad hoc committee to review the security arrangement of the country. We will revisit the report of the committee, in addition to making new efforts at finding solutions to the security challenges presently facing our nation.”