These great walls which were built in the 11th century are under threat as a result of human encroachment and collapse. The Ancient Kano City Walls (Hausa: Kofar Na’isa) were ancient defensive walls built to protect the inhabitants of the ancient city of Kano. The structure which is today known across the world as the ‘famous Kano city walls and gates’ was started during the reign of King Kijimazu from 1095 to 1135 AD. 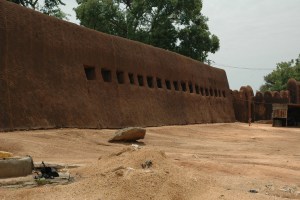 The Ancient Kano City Walls were built as a defensive wall with the construction of the foundation laid by Sarki Gijimasu (1095–1134), the third king of in the Kano Chronicle. In the mid 14th century during the reign of Zamnagawa, the wall was completed before it was further expanded during the 16th century. According to historians, the then General-Governor of the Colony and Protectorate of Nigeria, Fredrick Lugard, wrote in a 1903 report about the Kano Walls that he had “never seen anything like it in Africa” after capturing the ancient city of Kano along with British forces.
When building the city walls in the 15th century ditches were made close to the walls to make it difficult for any invader to get through before mounting the walls. Today, all the ditches have turned to ponds where the walls are sited inside Kano city. Gates were also created in specific areas of the walls, and each of them has a gate keeper known as (Sarkin Kofar) and houses are provided for them and their families inside the gates or around them till today.

The city walls are no longer outside Kano city as they were in those days. They are now inside the city and this has made it possible for people to constantly tamper with the walls, in the course of developmental activities and congestion in the area.

The Ancient Kano City Walls are made up of Dala Hill where it was founded, Kurmi Market and the Emir’s Palace.
The Ancient Kano City Walls originally had an estimated height of 30 to 50 ft and about 40 ft thick at the base with 15 gates around it. The walls and gates were previously under the protection of the Emir. In 1959, the Federal Government declared it a national monument. Now, it is the responsibility of government to safeguard, maintain, protect and preserve them.