It was reported by the Benue State Government that it has lost over N400 billion worth of property to renewed militia herdsmen attacks on communities in the state between 2015 and now
Governor Samuel Ortom  who made it known while briefing newsmen on the achievements and challenges of his administration in the past three years, at Government House, in Makurdi said the estimate was arrived at following preliminary report of assessment of damages caused by the crisis.

He lamented that the continued herdsmen attacks on the state had caused untold hardship on every resident of the state either directly or indirectly stating further that the loss was much and difficult to recover from.
While stressing that the Benue State Open Grazing Prohibition and Ranches Establishment Law 2017 was the peoples legislation, the Governor who noted that he had no regret whatsoever concerning the enactment and implementation of the law insisted that no amount of intimidation or blackmail would make them repeal it.
“I have no regret. Why should I have any regret doing the will of my people? They trusted me and gave me their votes and I will not betray what they want. I’m doing what they want and I’ve no regret,” Governor Ortom stated.
He commended his colleagues from Ekiti, Taraba and Abia States for keying into the ranching law, saying it was the right way to go even as he also called on Nigerians with a better alternative to bring it on the table to find a lasting solution to farmers and herdsmen crisis in the country.
Ortom challenged the Defence Minister, Dan-Masur Ali to come out and tell Nigerians why there are killings in Zamfara, his home state, and other states of Nigeria like Kaduna, Adamawa, Plateau, Enugu, Kogi, among others, where there are no anti-open grazing law, saying he was waiting for the minister to come out and apologise to Nigerians for his comments. 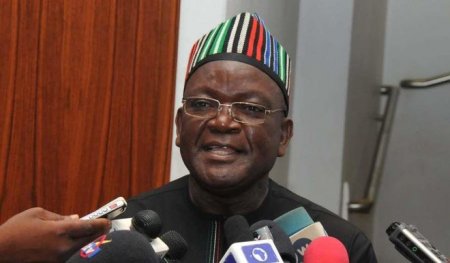 Pointing out that on assumption of office, he came in with a clear vision to industrialise the state, the governor lamented that the herdsmen crisis had taken an enormous toll on his administration with 18 out of the 23 local governments currently under siege.
He however noted that partnership with development partners, donor agencies among others through payment of counterpart funds had yielded great results for the state in the areas of education, health and water supply, adding that the result would have been wonderful with guaranteed security.
Governor Ortom also stated that arrangements were being made to pay arrears of salaries and pensions to workers both at the state and local government levels whom he said were being owed for some months last year.