Young Shall Grow motors boss, Obianuju Vincent, was shot by notorious kidnapper, Evans, in an attempt to kidnap him in 2013, Police witness says.

The police officer attached to the Inspector-General of Police Intelligence Response Team, Idowu Haruna narrated the incident to a Special Offences Court on Wednesday.

Haruna told the court that Evans and his gang members shot Vincent and killed two of his escorts, Punch Metro reports.

Haruna while being led in evidence by the state counsel, Adebayo Haroun, said the incident occurred on August 27, 2013 at Third Avenue, Festac Town. 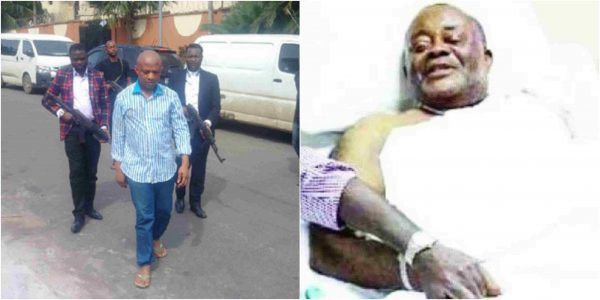 “I recognise the defendants as those who attempted to kidnap the chairman of Young Shall Grow motors, Chief Obianuju Vincent,  sometime in 2013.

“The YSG chairman was returning from a game house along Festac Town when his convoy was attacked by heavily armed men led by Evans.

“During the attack, the YSG chairman was shot in the right arm while his driver, one Mr Peter Nweke,  was shot dead. One of his escorts, Chijoke Ngozi (female),  was also shot dead.

“During a gun duel between the chairman’s police escorts and the gang, three of the gang members were shot dead by Inspector Solomon Igwe, while the rest fled  the scene.

“Two rifles belonging to the gang members were later recovered by the Festac Police Division, where the case was reported and the corpses were later removed by the police.

“Immediately the matter was assigned to my team, we arrested the 1st defendant (Evans), who narrated the entire operation to us. Evans told us that he was the leader and the one who led the gang to the operation. Evans mentioned the 3rd defendant (Arinze) as the informant of the operation.

“He told us that Arinze had monitored the movement of the YSG chairman for four days in order to give him detailed information about his routine.

“Evans also named the 2nd defendant (Emeka) as his syndicate in all criminal activities while the 4th defendant ( Upong) supplied him with the weapons and firearms.”

“When the victim came to the station, Evans knelt before him and apologized for killing his two escorts. He told him that he was sorry for their deaths and that it was a mistake.

“Evans told the victim that he had no intention of killing anyone during the operation but only wanted to kidnap him and later demand for ransom.

“Evans begged that he was misinformed about the victim’s police escorts who were also armed.”

The presiding judge, Justice Oluwatoyin Taiwo,  adjourned the matter till January 6, 2019, for the continuation of trial.