Are Igbos The Most Brilliant Black African Race? Facts And Figures From The US Academic Report 2015 Gives An accurate Answer to this.

Other than the current report of various Igbo students in the USA and Europe exceeding expectations at spectacular levels in their academic -, for example, the instance of Augusta Uwamanzu-Nna and Harold Ekeh who both scored entrance into all the eight Ivy League Schools in the USA, the insight of the Ibos (Igbos/Ndigbo) of southeastern Nigeria has been a subject of numerous examinations. The following is a US Academic report that addresses the subject utilizing truths, figures, numbers, and graphs (see Images/Charts) underneath.

“If only environmental factors were responsible for the different IQs of different populations, we should expect to find some countries where Africans had higher IQs than Europeans. The failure to find a single country where this is the case points to the presence of a strong genetic factor.” Richard Lynn.
“Regression would explain why Black children born to high IQ, wealthy Black parents have test scores 2 to 4 points lower than do White children born to low IQ, poor White parents.” Arthur Jensen.
The fact that black immigrants to the United States have shown achievements that are superior to native black Americans has been a phenomenon studied since at least the 1970′s. At first it was just the Caribbean blacks who were a subject of this unexpected outcome. As black Africans kept immigrating into the US, they showed even higher levels of achievement than the native blacks. Many scholars theorized on the reasons for these differences, from Thomas Sowell’s proposal that this disproved the validity of discrimination against native blacks as an explanation for their underachievement (Sowell, 1978), to other scholars who suggested that these immigrants were just the most highly driven members of their home countries as evidenced by their willingness to migrate to a foreign country (Butcher, 1990).
What most of these theories failed to predict was that the children of these immigrants would also show exceptional achievements, especially academically. It is only in recent years, as the immigrants have stayed long enough to produce a sufficiently high number of offspring, that it has been observed that they are over-represented among high academic achievers, especially when compared to native blacks, particularly at very elite institutions. What has been missed in the IQ debate is the full logical implication of these achievements: they have effectively nullified any arguments for a racial evolutionary explanation of the well-known IQ test score gap between blacks and whites. Even more fatal for the racial hereditarian side of the debate has been the corroborating data of school children performance in the UK, particularly when the black Africans are divided into their respective nationalities and tribal ethnicities, as reported in the latter section of this article. 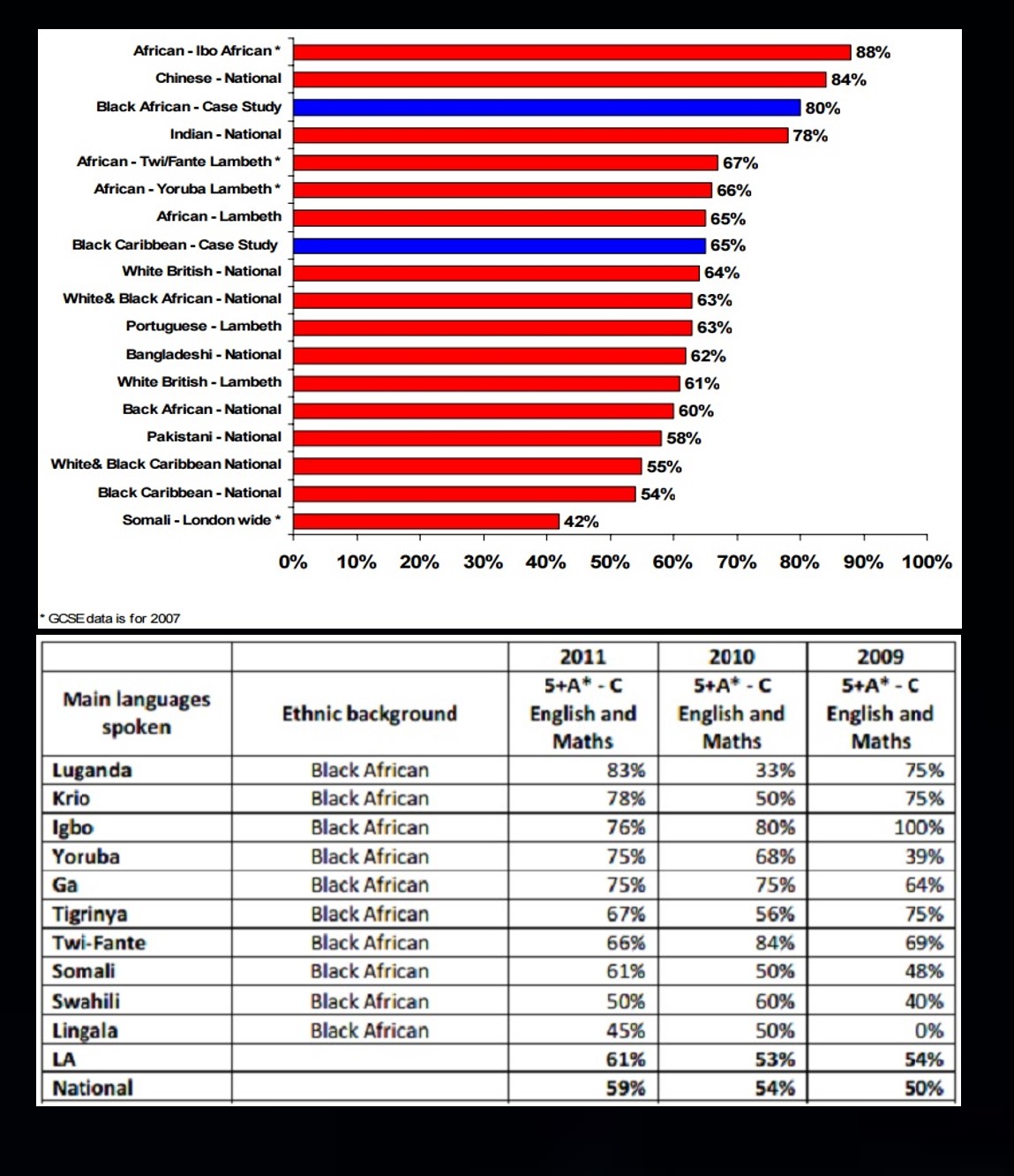 Arthur Jensen gave at least two empirical tests that could potentially falsify his thesis of a race based genetic explanation for the black-white IQ gap. Firstly, if the gap is caused by genetic racial differences, the blacks with more white admixture should tend to show a higher IQ than blacks with less whiteness. Secondly, “regression to the mean” implies that children (or siblings) of extraordinarily high IQ blacks should tend to a lower IQ than the children or siblings of similarly high IQ whites. Social experiments concerning the first test have not been decisive, especially due to the difficulty of separating out environmental factors since lighter American blacks have historically faced more favorable socioeconomic conditions. The second test did indicate some evidence of regression to a lower black mean for African Americans, which only means that the racial genetic hypothesis was not nullified; it remained a valid proposition. Until now.
Using Jensen’s own empirical framework, the racial genetic hypothesis can be tested by comparing black African immigrants with native blacks, intellectually. If the genetic hypothesis is correct, children of elite African blacks will tend to have lower IQs than children of native black Americans, and perhaps even lower than children of low IQ blacks, the same phenomenon observed between American blacks and whites since native blacks are basically “more white” than African (or Caribbean) immigrants. 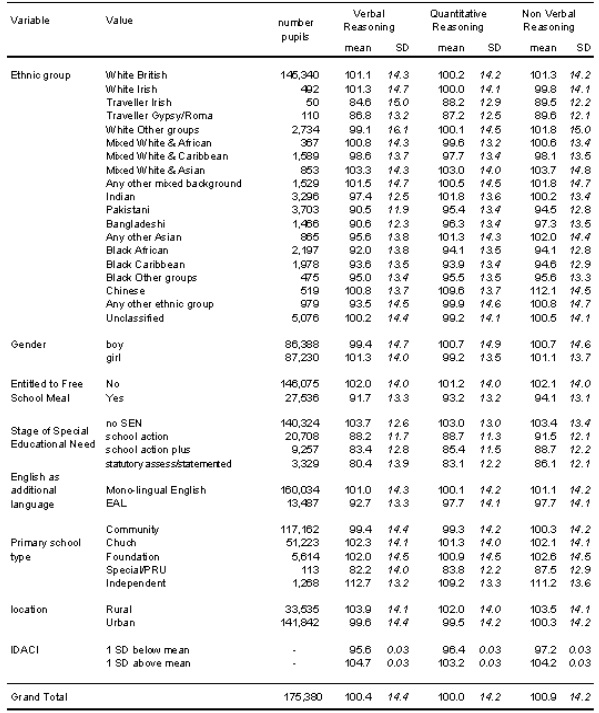 In the US, it is not only at elite universities where there is a clear over-representation of black immigrant children, it is also at public gifted schools and any kinds of intellectually gifted programs that are highly selective on intelligence. For example, when the New York Times did a story to show the experiences of blacks at Stuyvesant High School in New York, they had to use the personal account of a West Indian black child there (Ann-Marie Miller); if they had many native blacks, that would have certainly been their preferred subject. Furthermore, the only other student who was interviewed for that article, Opraha Miles, a former president of the black student society at Stuyvesant, also just happened to be Jamaican; no black American student was mentioned in the story. A close look at a number of other such institutions shows even more clear evidence of a tendency for black immigrants to be over-represented as selectivity requirements for an academic institution (or complexity of a subject) goes higher.
In the world of intellectually gifted schools, perhaps the most selective in the United States is a special program called the Davidson Academy started by Jan and Bob Davison in 2006 in Reno, Nevada. The tiny school boasts of selecting only the most profoundly gifted children (the highest of the five levels of giftedness) whose IQ is so high that “only one in every ten thousand children in America” can qualify to the school in any one cohort; it is more selective than Stanford or Harvard can ever be. The school makes no efforts or pretensions to affirmative action and as such, they have had very little “diversity.” However, a search through the promotional materials of the school for a black student – all schools and colleges will always show some black faces in their promotional materials if they have any – reveals that they have had at least one black student, and it was, unsurprisingly, a Nigerian Igbo.

Just like in anything that attempts to compare or contrast one race or people with/from another, the the issue of IQ gap or comparison is not without its own arguments. In a lengthy article, Chanda Chisala involved territories outside USA in the analysis by using students in the United Kingdom. Her article verified the brilliance of the Igbos but also further concluded that blacks are ahead of their fellow students from the United Kingdom and even Asia. Below is an excerpt from her piece titled –Blacks-Especially-Igbos-Prove-More-Intelligent-Than-Whites-Including-The-Asian-Leaders.

“The most definitive proof of Africans’ grossly underestimated genotypic IQ (80 according to Lynn, or 70 according to Jensen and Rushton, et al) has come in recent years from the performance of African school children in the UK. These results sparked instant reactions in the IQ debate world as soon as they started being reported by the news media, with some strong hereditarians suddenly becoming some kind of neo-environmentalists just to explain why white school children were not showing the kind of academic superiority over blacks that they have become accustomed to in the United States (wrong tests, declining white culture, an alleged war on whites, etc – the same kinds of reasons they always dismissed from liberal environmentalists explainingblack underachievement in the US).”

“The first report that caused some consternation in the IQ blogosphere indicated thatblack African pupils were apparently catching up with British white pupils on their GCSE tests and that in fact, they had already overtaken them at the lower end: the poor black kids were now performing better than poor white kids (The Guardian, 2010). Hereditarian psychometricians and scholars from Jensen to Gottfredson, Lynn, Rushton, et al had after all declared that IQ predicted test scores on all kinds of tests since a common factor of intelligence, g, was highly robust.”

“As the table above shows, some African nationalities, particularly Ghanaians and Nigerians, score way above the England mean (and the white British mean), while others, like the Somalis and Congolese, score way below (but still not as low as the Portuguese immigrants, apparently). The low scoring African groups are the ones that migrated as refugees and/or could not speak English, besides being very poor. Improvements among the Somalians have been impressive, especially due to programs dedicated to teaching them English.”

“Although the Chinese and Indians are still very conspicuously above even the best African nationalities, their superiority disappears when the Nigerian and other groups are broken down even further according to their different tribal ethnicities. Groups like the famous Igbo tribe, which has contributed much genetically to the African American blacks, are well known to be high academic achievers within Nigeria. In fact, their performance seems to be at least as high as the “model minority” Chinese and Indiansin the UK, as seen when some recent African immigrants are divided into languages spoken at home (which alsoindicates that these are not multigenerational descendants but children of recent immigrants).” Partly culled from: newsrescue.com