The Imo State Police Command has announced the arrest of three members of a four-man armed robbery gang who killed two policemen at Zenith bank on Whetheral road, Owerri.

The Imo State Commissioner of Police, Chris Ezike, made this known on Tuesday while addressing newsmen in Owerri, the state capital. 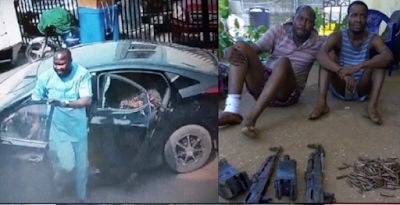 According to him, in the ensuing gunfire, one of the armed robbers later known and identified as Ikechukwu Okpara was shot dead by Sergeant Chukwudi Iboko.

The police boss disclosed that Sergeants Iboko and Sunday Agbo later died on February 23 (in contrast to the previously disclosed April) while receiving treatment at the hospital from gunshot injuries.

The three of the armed robbery suspects arrested, he said, were Justice Ogbona, Abiye Charles and Ikechukwu Nwanegbo, aka Modestus.

The police commissioner said that the two policemen who died, including Otu Attang who survived the attack remained uncommon heroes, adding that they displayed gallantry, professionalism, courage and passion in defence of lives and property.

Frankly, the police coming now to give contrasting reports after the video went viral is appalling..
Loading...