Deep social changes have taken place among the Hausa tribe. Today’s Hausa man is not just a peasant who constantly cultivates his field year after year, or an artisan who weaves narrow cloth strips on the hand-held machine. He is more than that.
You may have already met an agronomist who studied the methods of modern agriculture, and the epidemiologist, radio engineer, factory master, skilfully reading the drawings, whose hands are accustomed to working with complex mechanisms. Each of them may be Hausa.

Hausa culture and their history
The craftmen of the Hausa tribe, weavers, dyers, tanners, blacksmiths became widely known. With their goods, Hausa traders penetrated not only to the markets of neighboring countries, but also to Tripoli, Cairo, Istanbul and many others. In the Middle Ages in Western Europe, products from colored ‘Moroccan leather’ made by the hands of Hausa tribe masters were in great demand. In large cities in Nigeria spinning and weaving mills, workshops for tailoring and footwear were created. Economic development also caused the growth of culture. Back in the XVII century the writing form of Hausa language was created on the basis of the Arabic alphabet. Later there were collections of poems and legends, historical chronicles and a lot of business documents.

Hausa archers were shot with machine guns, the walls of the cities collapsed under the fire of howitzers. Most of the territory inhabited by the Hausa people became part of the English colony of Nigeria. The smaller part was captured by the French colonialists. No repression of the colonialists could stop the course of history and in 1960 the peoples of Nigeria and the Republic of Niger won and solemnly celebrated the proclamation of independence. In the countries where the Hausa tribe live, they, together with other peoples, have thrown off the yoke of colonialism. Now, these people are building a new free life. It is on the way to strengthening the political and economic independence of its countries.

Hausa traditional marriage
Weddings are always something special, romantic and beautiful. And the Hausa ones are no exception. Hausa girls are very beautiful and tender brides.
Hausa brides (like all brides) consider wedding the most important day in their life. That’s why they do not save money for decorations for wedding ceremonies. Lali (drawings on the hands) or Mendi are mandatory attributes for the bride. 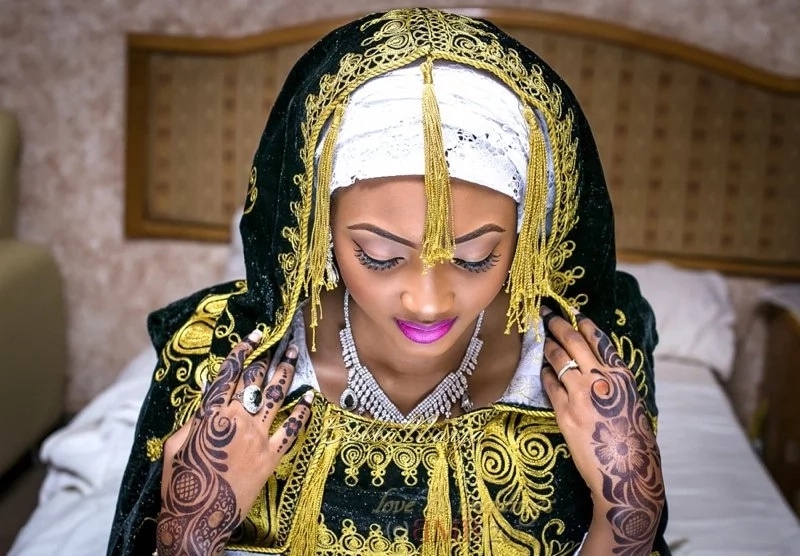 The bride must have many ornaments, and not ordinary ones, but gold and as much them as possible. Bride dress code does not exist. She can wear a skirt with a blouse in national style or a caftan (long dress). The color of the outfit also does not matter. Well, naturally, there also should be a beautiful makeup! Hausa ladies are famous for their stylish and trendy makeup ideas! The bridegroom must give money to the bride for dresses, ornaments and a make-up artist. It is believed that the more the bridegroom gives for wedding expenses, the more he loves her. Preparation for the wedding begins long before the appointed date and the wedding itself lasts for four days. The bride must wear another outfit for every day of the wedding.

Traditional Hausa dressing
Most Hausa people wear something between shirt and robe. Hausa men wear ‘Jalabiya’. Round caps with a flat top are very popular. There are caps of the same color, but many prefer those that are embroidered with bright red, orange and green color. Women from the Hausa tribe usually dress in such a way that they hide almost every part of their body. This is mostlydue to their strong religious beliefs. In addition to Islamic ‘hijab’, women’s clothing consists of a wide piece of cloth that is wrapped around the waist, and a headscarf or embroidered gowns, etc. 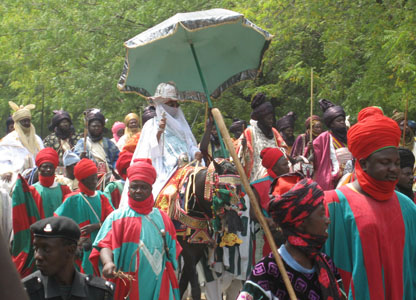 Hausa music
The music of this people is torn between Islam and the pagan past, which divides it in two: the music of big cities and the village songs. In the city, the influence of Islam completely suppressed the pagan ethnic traditions of Hausa, which are still evident in the countryside. In cities, this music is of a religious nature. Praising Allah goes to the accompaniment of timpani and ‘talking’ drums. However, the further we move away from cities, the more diverse the music becomes. The main instruments used for accompaniment of laudatory songs are drums, namely small timpani. The most impressive of the instruments on which the Hausa music is performed, is an elongated pipe called kakakai. This instrument was originally used by the Songhai cavalry and was adopted by the growing Hausa-speaking states as a symbol of military power. Kakakai is usually accompanied by large drums, tambura. As elsewhere in Africa, traditional rural Hausa music is clearly dying out, giving way to popular. However, they still continue to draw inspiration from traditional roots. Hausa are very interesting people with rich history and culture and they are among us. 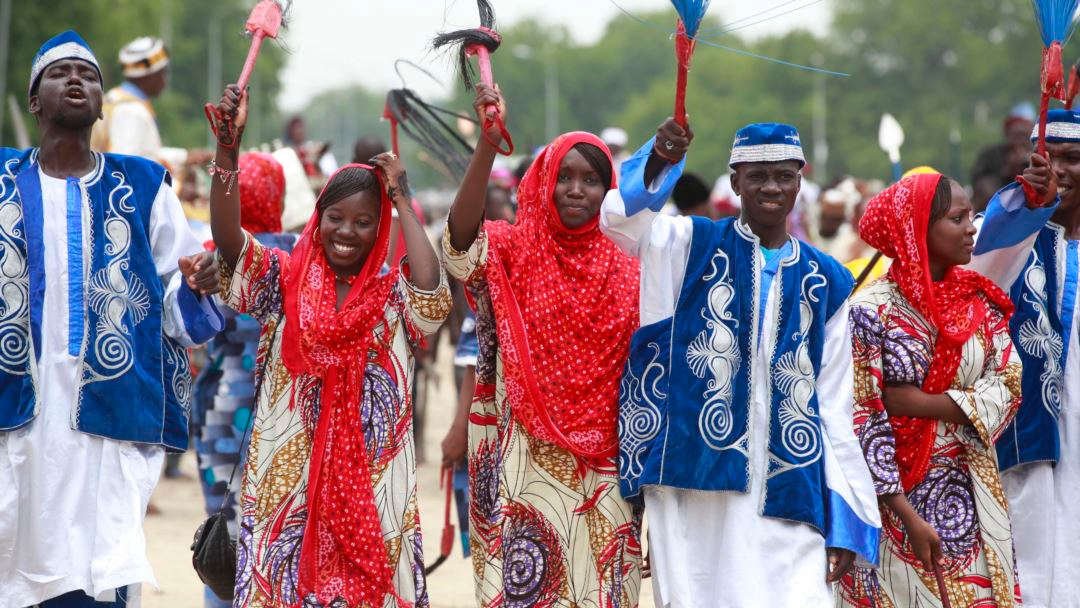