Nigeria’s Minister of Communications and Digital Economy, Isa Pantami, has called out the leadership of the Nigerian Postal Service, NIPOST, for increasing its fees without his approval.

In addition, logistics companies operating within regions are expected to pay N5m for licence and N2m annually, and firms operating within states would get a licence for N2m while renewal costs N800,000. Courier firms running within cities are to pay N1m for licence and N400,000 annually. Small and Medium Enterprises would be receiving a licence for N250,000 while the annual renewal of the licence is N100,000.

The new charges introduced by NIPOST are expected to cause an increase in the cost of courier services and delivery of goods.

Responding to the outcry on Twitter this morning July 25, Pantami who supervises activities of the postal service, said he wasn’t aware of the increase and has directed the immediate suspension of the increase in fees.

Pls @NipostNgn, our attention has been drawn to an increase of licence fee, which was not part of the regulation I earlier APPROVED for you. Your Chair and PMG were YESTERDAY contacted to put the implementation on hold and send a report to our ministry by Monday. Best wishes!

@NipostNgn, d power of regulation of NIPOST lies with the Minister. Any change of fee must be specific & be approved by him before implementation. I know the economic challenges of NIPOST. However, looking at the economic hardship of our citizens, we need to suspend any move

The increase, is under investigation by my office, since yesterday. The Ministry and the Minister were not involved. Many thanks and best wishes! ” he tweeted 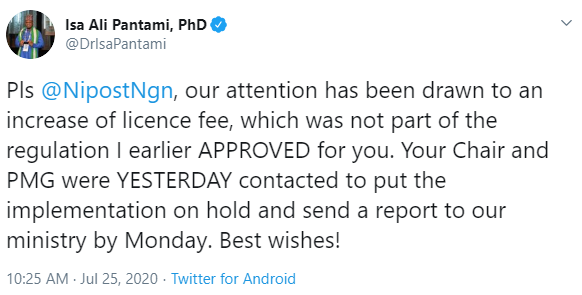 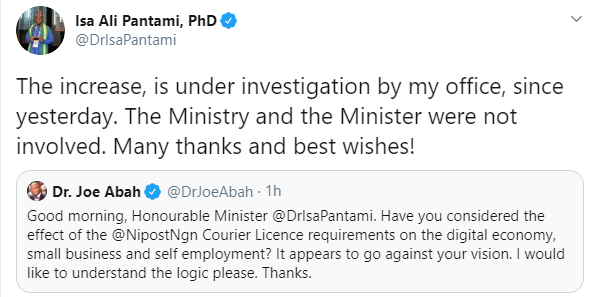