I am very sure many of us know or have heard of the Alabukun Powder. This is a very well known drug in Nigeria. This is the history of the man that made it.

For over nine decades, Alabukun Powder has maintained its stand as one of the most popular patent medicines commonly found in Nigerian homes, workplaces, pharmacies and street shops. Its cheap price and quick effectiveness has kept it from falling off the stall since 1918 when its formula was discovered by a hardworking and unrelenting Nigerian pharmacist, Jacob Shogboyega Odulate popularly called ‘Blessed Jacob’. This reminds one of another Nigerian product, St. Louis Sugar, which has also become a household name over decades of its existence. Both Alabukun Powder and St. Louis Sugar have another thing in common besides being around for long, they have never been advertised in the media, yet they firmly held their ground in their respective markets. Continue reading The Story Of Jacob Odulate And How He Invented The Famous Alabukun Powder in 1918

Jacob Shogboyega Odulate was born in 1884 to the polygamous family of Pa Odulate in Ikorodu, Lagos. Jacob Odulate stopped schooling at the young age of 12 and moved to Abeokuta, Ogun state, at the age of 14 in search of greener pastures. According to an account by his eldest surviving daughter, Stella O. Odesanya, Jacob travelled from Ikorodu, his hometown, to Abeokuta on foot within a period of three months. It was in Abeokuta that Jacob met a renowned pharmacist, Doctor Sapara, and volunteered to become his apprentice. Jacob Odulate worked with Dr. Sapara for years before he established his own drug manufacturing company which he named Alabukun. While struggling to make a name for himself and his company, Jacob met a young pretty lady named Sekunmade whom he later married. 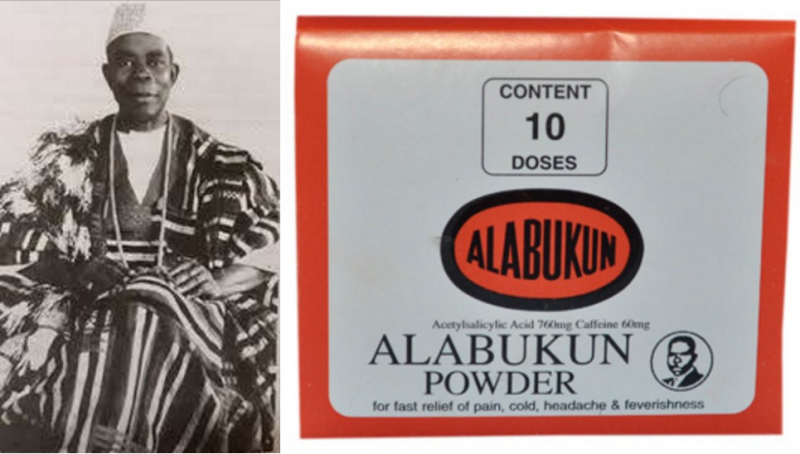 It was an unforgettable day in the year 1918, four years after Nigeria was birthed from the amalgamation of the northern and southern protectorates, Jacob Odulate sat at his laboratory desk after tons of researches and developed a formula for a drug he called Alabukun Powder. Jacob Odulate’s formula was a combination of both native and foreign medicines which gave him a result so excellent than he had expected. A packet of Alabukun contain “760 mg of acetylsalicylic acid and 60 mg of caffeine making a total of 820 mg.” It is used to treat many medical conditions which include “migraine, toothache, sore throat, prevention of blood clots, neuralgias, myocardial infarction, transluminal angioplasty and ischaemic attacks.” However, the powder drug is not to be used without a doctor’s prescription and like every other drug, Alabukun has its side effects some of which are swelling due to fluid accumulation, asthma, vomiting, nausea and vertigo.

Alabukun Powder made a big wave as soon as it hit the market in 1918, an era characterized by colonialism which was then in many ways unfavourable to the natives of Nigeria. Alabukun Powder was exported to nearby countries such as Benin Republic, Togo, Cameroon and Ghana as its demand kept soaring higher. Till today, Alabukun Powder is exported far away to Brazil, Cuba and some countries in Europe as well. Jacob’s drug manufacturing company has its headquarters located in Sapon, Abeokuta, Ogun State. Other products of Alabukun brand are Alabukun Mentholine and an annual journal called Alabukun Almanac which was widely distributed in Abeokuta and its environs between 1920 and 1950. Alabukun Powder wasn’t advertised in the media due its popularity at the time it made its debut in the market and mainly because of its composition. Nevertheless, Alabukun Powder remains one of the oldest and widely used patent medicines in Nigeria and neighboring countries.

Jacob Shogboyega Odulate alias Blessed Jacob died in 1962 at Creek Hospital, Onikan, Lagos and was survived by wife and children.