An Abuja resident has raised the alarm about his neighbour, who beats his pregnant wife day and night.

The man, who identified himself simply as Biba, raised the alarm in a tweet on Thursday night, adding that the husband locks up the victim at home and goes to work with the keys everyday.

Police have responded to Biba’s tweet and asked him to send the couple’s address via Twitter for immediate intervention.

Biba said the man, who is a banker, and the wife moved into the neighbourhood two weeks ago.

Tweeting with handle, @Biba_Orion, he stated: “I have a New Neighbour who just Moved in Two weeks ago he Beats his wife Morning and Night everyday he is a Banker wife is a Full house wife. I have tried getting closer to the wife to tell me what the issue is but the husband lock her up before going to work…. O ti su mi o.

“I am guessing I should report him to the Police or something but won’t they ask wetin consign me trust Nigerian Police? Or what should I do? Before the Man will kill her.

“And she is pregnant sef.” 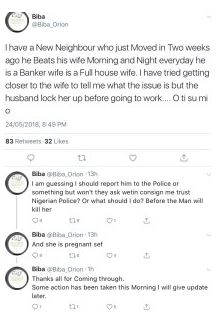 The officer in charge of the Public Complaints Rapid Response Unit of the police, ACP Yomi Shogunle, who responded to the alarm, tweeted: “@Biba_Orion Please DM the house address so we can send a @PoliceNG team to rescue her. cc: @Tobi_Nextlevel Thanx for the info. @PoliceNG_PCRRU.”