Sickle-cell disease (SCD) is a genetic blood disorder that affects the haemoglobin within the red blood cells. The recurrent pain and complications caused by the disease can interfere with many aspects of the patient’s life, including education, employment and psychosocial development.

In recognition of this, the WHO under the DNC Department, supervise and coordinate interventions relating to the prevention and management of SCD. WHO intends to support Primary prevention; Early detection – screening; reduce morbidity ; chemoprophylaxis, vaccines, clinical care of special groups (children, pregnant women); capacity building Human resource; improve quality of life of patients and build partnerships.

The sickle-cell trait is now known to be widespread, reaching its highest prevalence in parts of Africa as well as among people with origins in equatorial Africa, the Mediterranean basin and Saudi Arabia. In Africa, the highest prevalence of sickle-cell trait occurs between latitudes 15° North and 20° South, ranging between 10% and 40% of the population in some areas.

Loading...
One of such Partnerships bought  Bujola Bolarinwa, President of the Sickle Cell Aid Foundation in Abuja, to Al Jazeera last week. “ Nigeria has the highest rate of sickle cell in the world,”You have millions of people living with sickle cell, hundreds of thousands of births every year, way more than HIV, way more than cancer and a lot of other diseases that get way more funds… Sickle cell doesn’t get enough publicity.” she said..
Bolarinwa was appearing on The Stream on Al Jazeera, after suggesting the talk show explore an experimental gene therapy that is offering hope to those who suffer from sickle cell anemia, an inherited condition that can cause crippling pain and shortened lifespans.
A French teenager with the genetic condition achieved complete clinical remission after researchers in Paris injected his stem cells with an anti-sickling gene from his own bone marrow. So far it seems to be working for the teen. Fifteen months since his last treatment, the patient is no longer dependent on medication and his blood cells show no sign of the disease.
“When this news came out, it was in most major news outlets but… there wasn’t any way for us to ask questions,” Bolarinwa told The Stream’s host, Femi Oke, a former Nigerian media personality of the year. “I work with a lot of people that live with sickle cell disease and they all came to me and said, ‘What does this new breakthrough mean for us? How soon is it going to be applicable?… Can we call this a cure?’ I wasn’t able to get answers to those questions.” 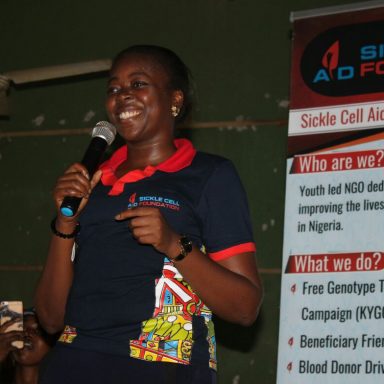 On The Stream, Jamie Wells, director of Medicine, American Council on Science and Health, and Julie Kanter, director of Sickle Cell research at University of Southern Carolina, had the answers Bolarinwa had been waiting for, but probably not the ones she’d hoped for.
Wells called for “cautious optimism” as more patients and more time were needed to monitor the long-term efficacy of the treatment. She also warned that the treatment was a long, involved process, with risks, so is typically reserved for the most severe cases at this early trial phase.
Kanter added, “It is right now not available for mass production and it is expensive… My goal one day somehow is that, when you know you’re going to have a baby with sickle cell disease, we can take the cord blood from that baby and insert the gene into the cord blood and give that doctored cord blood back before the first year of life. But we’re not there yet.”
Kanter suggested the focus in Nigeria for now should rather be to have newborn screenings. “Because the most important thing we can do first is start patients on penicillin. Penicillin is not expensive; the problem is diagnosing kids right away at birth and getting them the help they need
.”

There is already a cure for sickle cell disease: bone marrow transplants. But even for those Nigerians who find a matching donor, this remains out of reach due to the costs involved, according to Bolarinwa.
“Things like stem cell transplants are completely out of it because you have to travel to India and other countries for them to do it; it’s not really available here,” she says. “A lot of the therapies are great; they’re good news. But if the people who need it the most can’t afford it, it really seems like just another far-fetched thing.”
She says that many Nigerians can’t even afford Hydroxyurea, a drug given to most children who live with sickle cell in the USA. “I take it and it’s really improved my life but a lot of people in Nigeria can’t afford it,” she says.
Kanter admitted pricing was “a huge problem. Because where are most babies born with sickle cell disease? In Sub-Saharan Africa and in Nigeria.”
Among other topics, The Stream also discussed the misconception that sickle cell anemia is a black disease; the reasons for the lack of awareness around it, even within the medical community; the stigmas associated with the disease; and the odds of having a child with sickle cell if you carry the trait.
Watch the Full Video Below..
Loading...