A Portuguese man who claims to have had a first hand experience of Nigerian culture, took to Twitter to disclose that it idolizes power and despises weakness.

The Portuguese man further disclosed that he got shocked with people bowing to powerful crooks, laughing at weak and suffering people, and running off to church every Sunday. He wrote;

In my experience, Nigerian culture idolizes power and despises weakness. After a decade I still get shocked with people bowing to powerful crooks and joking and laughing at weak / suffering people or animals. But then run to church every Sunday…

Several cultures including my own, respect and protect the weak particularly those that are suffering. And a former Prime minister of Portugal was arrested for failing to explain where his wealth and expensive lifestyle comes from

Just replying to a question with facts. In Portugal and in most European countries anyone with relevant signs of wealth -from unclear origin – will be investigated by the press and the judiciary system. And at least will be socially penalized. 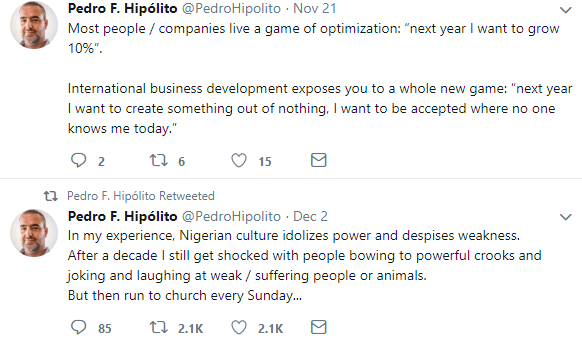