Ben Okri OBE FRSL (born 15 March 1959) is a Nigerian poet and novelist. Okri is considered one of the foremost African authors in the post-modern and post-colonial traditions, and has been compared favourably to authors such as Salman Rushdie and Gabriel García Márquez.

Since he published his first novel, Flowers and Shadows (1980), Okri has risen to an international acclaim, and he often is described as one of Africa’s leading writers. His best known work, The Famished Road, which was awarded the 1991 Booker Prize, along with Songs of Enchantment and Infinite Riches make up a trilogy that follows the life of Azaro, a spirit-child narrator, through the social and political turmoil of an African nation reminiscent of Okri’s remembrance of war-torn Nigeria.

Okri’s work is particularly difficult to categorise. Although it has been widely categorised as post-modern, some scholars have noted that the seeming realism with which he depicts the spirit-world challenges this categorisation. If Okri does attribute reality to a spiritual world, it is claimed, then his “allegiances are not postmodern [because] he still believes that there is something ahistorical or transcendental conferring legitimacy on some, and not other, truth-claims.” Alternative characterisations of Okri’s work suggest an allegiance to Yoruba folklore, New Ageism, spiritual realism, magical realism, visionary materialism, and existentialism.

Against these analyses, Okri has always rejected the categorisation of his work as magical realism, claiming that this categorisation is the result of laziness on the part of critics and likening this categorisation to the observation that “a horse … has four legs and a tail. That doesn’t describe it.” He has instead described his fiction as obeying a kind of “dream logic,” and stated that his fiction often is preoccupied with the “philosophical conundrum … what is reality?” insisting that:

“I grew up in a tradition where there are simply more dimensions to reality: legends and myths and ancestors and spirits and death … Which brings the question: what is reality? Everyone’s reality is different. For different perceptions of reality we need a different language. We like to think that the world is rational and precise and exactly how we see it, but something erupts in our reality which makes us sense that there’s more to the fabric of life. I’m fascinated by the mysterious element that runs through our lives. Everyone is looking out of the world through their emotion and history. Nobody has an absolute reality.”

He notes the effect of personal choices, “Beware of the stories you read or tell; subtly, at night, beneath the waters of consciousness, they are altering your world.”

Okri’s short fiction has been described as more realistic and less fantastic than his novels, but these stories also depict Africans in communion with spirits, while his poetry and nonfiction have a more overt political tone, focusing on the potential of Africa and the world to overcome the problems of modernity.

Okri was made an honorary vice-president of the English Centre for the International PEN and a member of the board of the Royal National Theatre. On 26 April 2012 Okri was appointed the new vice-president of the Caine Prize for African Writing, having been on the advisory committee and associated with the prize since it was established 13 years prior. 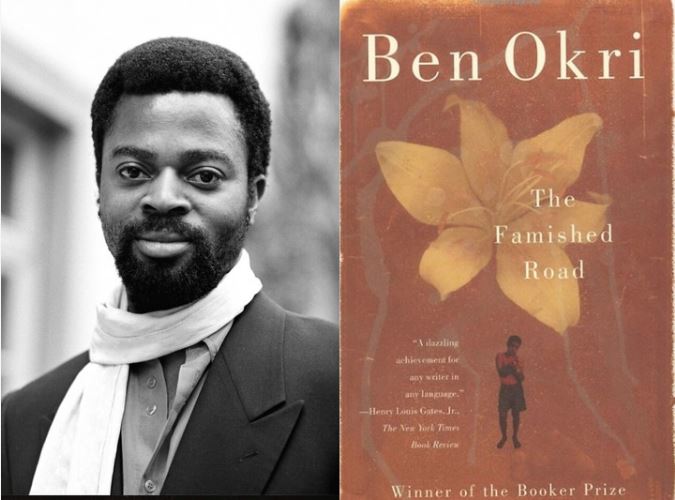