Writers, Nonyelum Ekwempu and Olufunke Ogundimu have been shortlisted for the 2018 Caine Prize for African Writing.

The Caine Prize for African Writing is a literature prize awarded to an African writer of a short story published in English. The prize was launched in 2000 to encourage and highlight the richness and diversity of African writing by bringing it to a wider audience internationally.

The shortlisted stories will be published in June in New Internationalist’s 2018 Caine Prize anthology, Redemption Song, and through co-publishers in 16 African countries who receive a print-ready PDF free of charge.

Nonyelum is a Nigerian writer and visual artist. She was shortlisted for her story, ‘American Dream’, published in Red Rock Review (2016), and republished in The Anthem. Her art is inspired by jazz, the African immigrant experience, and the colours and vibrancy of various African cultures. She is currently a medical student at Loyola University Chicago Stritch School of Medicine.

Born in Lagos, Olufunke has an MFA from the University of Nevada, Las Vegas. She was shortlisted for her story, ‘The Armed Letter Writers’, published in The African Literary Hustle (2017). Her work has been published in Dream Chasers, Nothing to See Here, Red Rock Review, New Orleans Review, and Transition Magazine. She is working on a short story collection reluctantly titled, The Was Thing, and a historical novel set in the twelfth-century Oyo Kingdom, titled, Memories of Three Rivers. 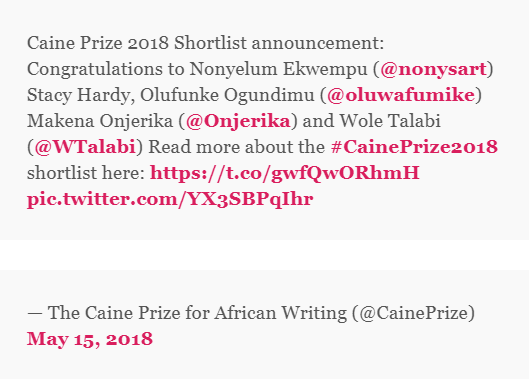