Speaking at the commissioning of the new cement plant which on full utilization will provide at least 2,000 direct and 10,000 indirect job opportunities, Osinbajo called on BUA Group to collaborate with other major cement manufacturers toward achieving reduced cement price to drive infrastructure development in the country.

Osinbajo noted that the inauguration of the plant was a milestone, not only for BUA Group, but for the cement industry and the nation’s economy. 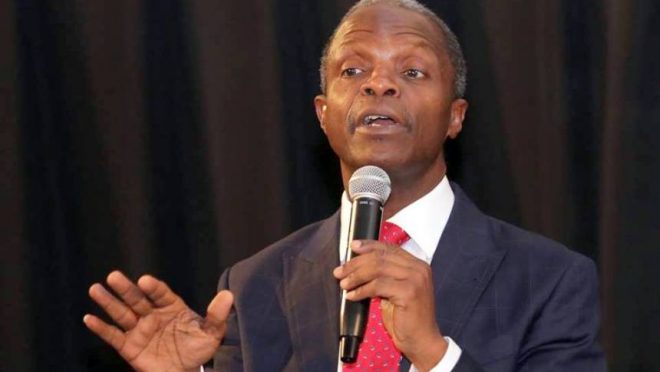 According to Osinbajo “Nigeria now produces over 40 million metric tonnes of cement. More cement than any other country in Africa. The citing of the Kalabaina cement factory by BUA is a demonstration that Nigeria has vast potentials which investors should explore”.

This achievement by BUA he noted, “Will consolidate Nigeria’s self-sufficiency in cement production, and boost our status as a NET exporter of cement. The significance of this feat cannot be over-emphasised as we explore opportunities to diversify the country’s earnings away from oil.

“The National Infrastructure Master Plan recommends that we need to spend $3 trillion to bridge the infrastructure gap as well as five percent of GDP annually”.

Making his address, the Executive Chairman/Chief Executive Officer, BUA Group, Abdul Samad Rabiu, attributed the milestone achievement being experienced in the country’s cement industry to deliberate policies put in place by the administration of President Muhammadu Buhari to support the real sector.

He noted that through some of the policies, the Central Bank of Nigeria (CBN) provided adequate foreign exchange for import of machinery, which has been helpful in completing the project on schedule.

Highlighting some of the unique features of the plant, Rabiu noted that the plant “Can run on either coal, heavy oils or a mixture of both thereby putting less pressure on our operations whilst improving energy-efficiency.

“By also using coal to power our kiln, we expect to save over 70% in terms of energy costs compared to if we had to use over 15 million litres of fuel oil per month or about 400 tonnes or 20 trucks of fuel oil per day.

The BUA Chief also added that, “The second line of our $1 billion Obu Cement Complex in Okpella, Edo State – which was commissioned in August 2017 will be completed by the end of this year and by the time that plant is completed, BUA Cement’s total production volumes will be in excess of 8 million tonnes which will represent over 35percent of the entire volume produced in Nigeria”.