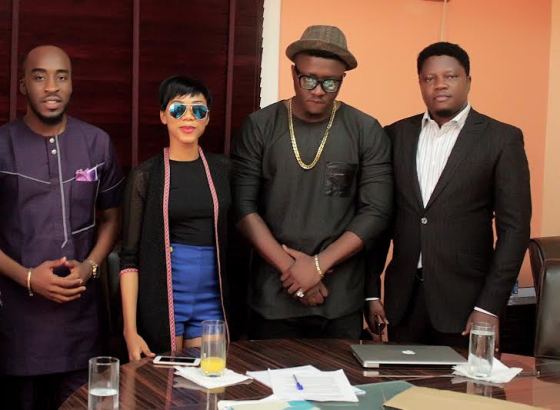 During the official signing at Illnostro Lagos headquarters today, the artists were very pleased with the deals and upbeat about their future with the label.

Tesh Carter who was signed on Clarence Peters’s Capital Hill label but took a short break from musicto complete her education. She has worked with industry giants such as Don Jazzy, Olamide, Jesse Jagz, Cynthia Morgan, etc.

Tiverion the other hand is fresh Hip-Hop act with a savvy flavour. He has worked behind the scene for some big names such as Oritsefemi, Chuddy K and Ozone just to name a few as a producer and is now ripe and ready to take on the music scene as an artiste.

Illnostro Records an arm of Illnostro Entertainment Ltd, was established 2014 with the mission to produce great Nigerian music for the global audience.Illnostro is committed to wholesome entertainment across board and firmly believes that quality, palatable entertainment can be realized without compromising commercial appeal.

We distinguish ourself through the commitment we undertake with each of our artists. Our logo motto and watch word is “Simply Good Music”