Minutes after a Dana Air aircraft overshot the runway of the Port Harcourt Airport after touch down, Dana Air has reacted.

According to a statement Lailasnews.com just received from Dana Air, their plane overshot runway in Portharcourt as a result of the ​bad weather situation ​and torrential rain at the time of landing.
Read their statement below: 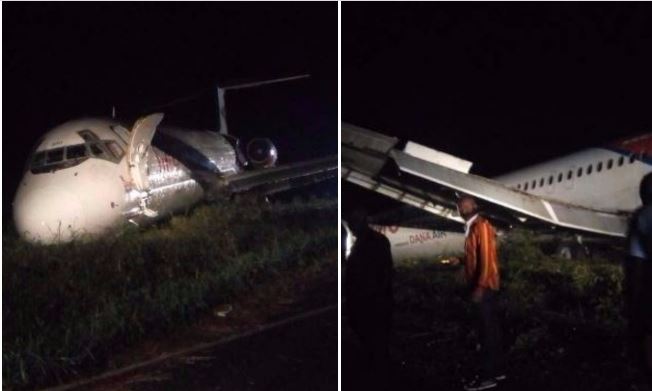 On Tuesday , 20 February 2018, one our aircraft (9j0363) operating the ​Abuja​ – Ph flight ​skidded off​ the runway ​at​ the Port Harcourt International Airport, as a result of the ​bad weather situation ​and torrential rain at the time of landing.

No casualty was recorded and all passengers and crew disembarked safely.

We commend the Pilot-in -command who was able to control the aircraft to a complete stop, before passengers and crew disembarked. We also wish to applaud the Captain for exhibiting the highest safety standards and handling the situation professionally.

A Dana Air aircraft on Tuesday, February 20th overshot the runway of the Port Harcourt Airport, Rivers State, after it touched down.

What this really means is the aircraft unintentionally moved past a specified point This, sometimes happens to a plane as a result of too much speed or that the plane is unable to stop.

The Dana Air plane, with number 9J0363, had picked passengers from the Nnamdi Azikiwe International Airport, Abuja and had just landed at the Port Harcourt airport.

“A Dana aircraft numbered 9J0363, flying from Abuja to Port Harcourt airport has overshot the Port Harcourt runway.
“The incident was suspected to have been caused by a heavy rain, which was accompanied by strong wind and storm in Port Harcourt.
“No casualty was recorded, as all passengers on board were safely evacuated.”