Apostle Johnson Suleman, the General Overseer of the Omega Fire Ministries is currently in the eye of the storm, over alleged s*x scandal with a canadian-based sNigerian tripper, Stephanie Otobo.

There is no doubt that many Nigerians are glad to see President Buhari back in the country after 50 days on medical leave in the United Kingdom. His return means different things to different people; to some it means stability to others continuity. But to Apostle Suleman it means a weekend out of the eye of the storm. The headlines, the taglines, the hashtags will all be about the return of the president.

Ms. Otobo, dragged the fiery man of God, Suleman to a court for allegedly impregnating her, promising her marriage and abandoning her.

Otobo’s lawyers claimed the cleric was so in love with her that he had to lick her entire body every time they had s*x.

Ms. Otobo was was arrested on March 3 at a United Bank of Africa branch in Lagos. While she was residing in Canada, Mr. Suleiman wired money to an account he had set up for her, according to the pastor’s lawyer.

The pastor then proposed to marry Ms. Otobo, prompting her to leave her home in Canada to start a new life with Mr. Suleiman.

After impregnating Ms. Otobo, Mr. Suleiman called off the marriage proposal and did everything in his power to ensure she remained silent. This culminated in his conspiring with police officers to arrest and detain Ms. Otobo.

He consequently froze Ms. Otobo’s bank account to which he had been sending funds, leading to her arrest in Lagos when she attempted to withdraw funds from the frozen account. 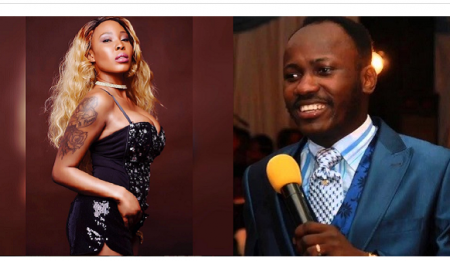 It is a long story. It was the hottest trending topic this week.

But, Nigerians now have something else to shift focus to. President Buhari – who just arrived the country after 50 days of being on a medical vacation in the UK. He returned at the early hours of Friday and was welcomed by friends, family, and political associates. While he was away, there were speculations as to whether the 74-year old is is physically fit to hold office.

In Buhari’s absence, Osinbajo has launched an economic recovery plan, and touched at several parts of the country. He filled in articulately for his principal.

Away from Suleman’s alleged scandal, Nigerians now have to worry about the health of its President, and how capable he is to continue in power. Especially, as he commissioned Osinbajo to remain in charge as the Acting President, while rests.

Apostle Suleman would be in a jubilating mood now. All the allegations this week will be on the back burner over the weekend His news will not trend even though his alleged canadian lover has been released from jail. For now, he will be off the front pages of the newspapers, as people focus on stomach infrastructure and the health of the president.

Only time will tell what happens next.