Prof Chukwuka Okonjo was praised for the educational and leadership qualities he possesses by our dear president Gen. Muhammadu Buhari.

The famous mathematician and economist, Prof Chukwuka Okonjo, the Obi of Ogwashi Ukwu, who turns 90 on Thursday, June 21 was congratulated by Muhammadu Buhari. Buhari’s congratulatory message is contained in a statement issued by his special adviser on media and publicity, Femi Adesina, in Abuja on Tuesday, June 19.

– The president prays that the almighty God would grant the Obi of Ogwashiukwu longer life – The minister of agriculture and rural development, Audu Ogbeh, insists the government is determined to implement a new plan to resolve the farmers/herders clashes President

The president joined the Ogwashiukwu community in Delta, the immediate and extended Okonjo family; professional colleagues and friends of the traditional ruler in celebrating the cerebral scholar whose imprint on education in Nigeria and beyond had remained indelible. 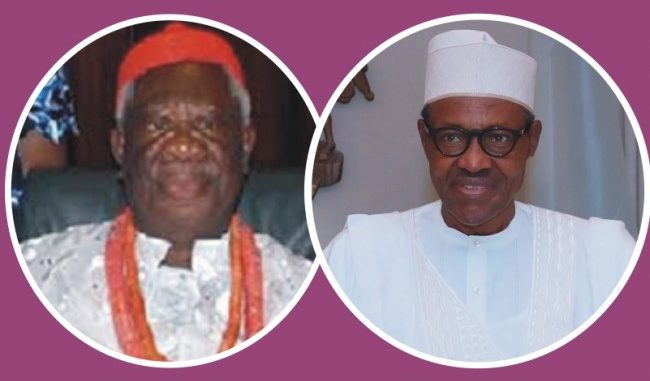 Buhari extolled the sterling educational and leadership qualities of Okonjo who pursued knowledge with interest and vigour from his youth. He noted with delight that Okonjo obtained a first degree in mathematics as an external student, and following up with two masters degrees in economics and statistics, and a doctorate degree in mathematical statistics. According to the president, the traditional ruler has sowed in many lives as a teacher, mentor and leader, particularly wielding a strong influence over his children and grand-children. Buhari noted that some of the children and grand-children had turned out to be “national and global icons by reputably serving the nation in various capacities.

He prayed that the almighty God would grant the Obi of Ogwashiukwu longer life, more strength and good health to keep serving humanity. In another report, the minister of agriculture and rural development, Audu Ogbeh, has said the defence minister, Mansur Dan-Ali, was expressing his personal views when he said anti-grazing laws by some state governments are responsible for the farmers/herders clashes. Ogbeh on Tuesday, June 19, said Dan-Ali’s comments did not represent the position of the federal government on the issue.The minister said the government was determined to implement a new plan to permanently resolve the herders-farmers crises.