One Dr. Mohammed Goge on Saturday, shared a quite interesting story of a First Class graduate, from a poor family background, who makes a living as a chicken dresser in Yobe, while awaiting his NYSC.

The young man, Ali Shuaibu Baba graduated from Yobe State University this year. His family’s source of income is from slaughter and dressing of local chickens. It was through the business that he paid his school fees. 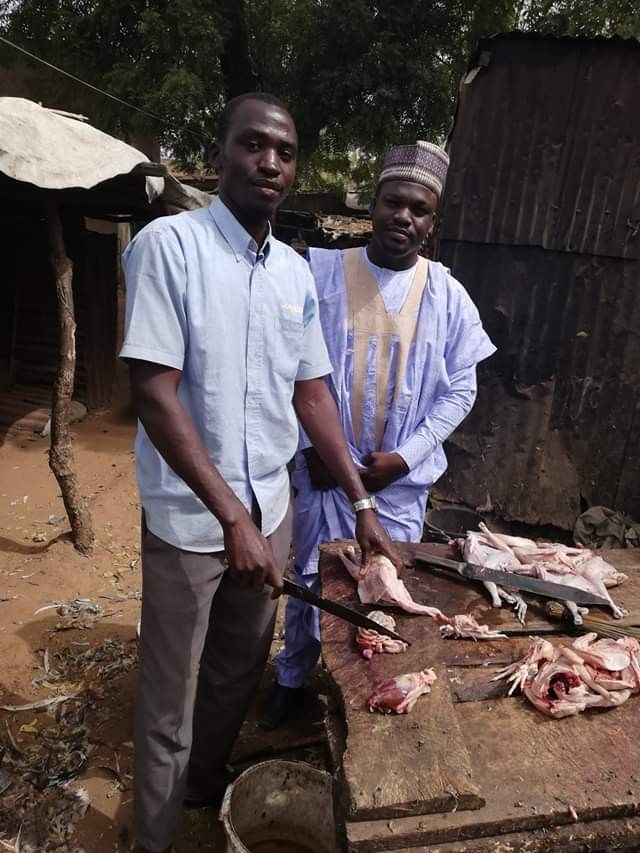 Read his story below,

On our way coming back from a wedding with a friend Suleiman Dauda we decided to branch and pick some local chickens for the December break, after buying the chick we proceeded to the meet a skilled poultry dresser for slaughter and dressing.

Upon arrival, I was surprise when the owner of the stand called my name: He said Dr ina wuni (Good afternoon Dr), I was like, may be is one those people who knew me through social media, as he started his work, I know became curious and asked him, have we met before?

He said yes sir, ”I attended the occasion of the launching of your scholarship program” and I was like, are you a student? then he said yes sir, but I have graduated this year (2018) waiting for my NYSC.

I was impressed and became more curios, I asked further, what did you study?
He said sir, I studied COMPUTER SCIENCE
I ask again, and your class of degree please?, and he drop the SHOCKER!!!!
He said, Sir I graduated with FIRST CLASS.

I now moved closer and below is some excerpt of our conversation…..
Ali Shuaibu is a determine young man from a family who are poor by Economist Index but rich in heart and determination to succeed by all odds.

The family source of income is from poultry slaughter and dressing and a times retail of local chickens.

He attended FGC Azare but almost missed his WAEC because of N 36,000. He then resolved to come and write WAEC at the Government Secondary School Kukuri but his Father (whom I also met today) insisted that he will work hard to raise the said amount before the WAEC, Ali came home before WAEC, work along with his father until they meet the 36000 requirements. He wrote his WAEC and got one of the best results.

After WAEC he applied,sat and pass Remedial science. He said:

“I don’t know anything about computer, because we don’t have it in our house but I still applied for the course, in my part 1, it’s all science courses so I have no much challenge to pass them. During our part 1 break, I worked so hard and saved 30,000 Naira, upon resumption a friend of mine who is studying Biology and has a used Tokunbo LAPTOP computer from LAGOS decided to sale the computer to me @ 30,000 Naira”.

Ali use the computer to study through the 4 years and graduated with FIRST CLASS.

I now ask Ali for a consent to snap with him, he said Yes, why Not…

“This is the business that paid my school fees,” he introduced me to his father.

I asked him further what he does beside this work,
He said while I wait for my NYSC, in the night I browse a lot and read a lot on IT.
We exchange contacts, we advised him further and promise to provide him some MENTOR SHIP.

The story of Ali, Is that of inspiration and perseverance
This is the Story of a child Born with no Silver Spoon but proceeded to get the Gold Spoon
ALI HAS MADE IT TO FIRST CLASS, ALL HE NEEDS NOW IS MENTORSHIP, NETWORK OF THINKERS AND A LITTLE PUSH UP
………. And take note: There is more talent hidden beneath what the eyes sees.