It is common knowledge that the late President Umaru Musa Ya’Adua did not pick former President Goodluck Jonathan as his running mate in the 2007 presidential election. 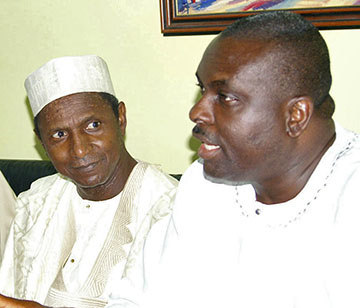 However, it has now been revealed that Yar’Adua’s preference was James Ibori, who was then completing his second term as governor of Delta state.

This is contained in a new book, ‘On a Platter of Gold: How Jonathan Won and Lost Nigeria’, written by Bolaji Abdullahi — who served as a minister under Jonathan from 2011-2014.

The book will go on sale nationwide from November 30, 2017 after the launch.

In the advance copy, the author said after three governors from the south-south — where vice-presidency was zoned to by the PDP — had been ruled out for one reason or the other during deliberations, Yar’Adua asked Nuhu Ribadu, then-chairman of the Economic and Financial Crimes Commission (EFCC), about Ibori.

This got President Olusegun Obasanjo angry — and Yar’Adau quickly retreated.

A UK court would convict Ibori of fraud in 2012, handing him a 13-year jail sentence.

He regained freedom in December 2016 after serving four and the half years and agreeing to be deported to Nigeria.

Abdullahi wrote: “During deliberations on the issue of zoning, the party leadership had also agreed that the running mate to whoever emerged from the North, would come from the South-South. This remained sacrosanct. The question was: who the running mate should now be, with Odili out of the picture. One major concern was that the eligible South-South governors were not only ambitious, they were all street smart and could easily overwhelm the mild-mannered Yar’Adua.

“Victor Attah and Donald Duke were ruled out on that account. However, even though it could be argued that Odili was more ambitious than those two, he had also contributed the most to the party. Now that his nomination had suffered a misadventure, the South-South options were even more limited.

“As they agonised over their limited options, Yar’Adua casually asked Ribadu in Hausa, ‘Shi mutumin Delta din nan fa?’  (‘What about the Delta person?’) He probably had forgotten that though not fluent in the language, Obasanjo could follow simple conversations in Hausa. Before Ribadu could muster a response, Obasanjo flared up again. Over his dead body would Ibori be Vice President. Ribadu knew at the time that Ibori had an outstanding case with the Metropolitan Police in London.

“When Ribadu dropped the bombshell, Yar’Adua relented and said, almost apologetically, that he had not been aware that Ibori had such a thing hanging over him; otherwise he would not have brought up the Delta governor’s name.  In any case, those close to Ibori at the time said he had only been interested in becoming the minister of petroleum resources. The search continued.”

It was at this stage that Jonathan’s name cropped up — and he initially rejected the slot.

“Goodluck Jonathan, the Governor of Bayelsa State, who had succeeded his impeached boss only about a year before never came up for discussion. Until now. Ribadu said all through the EFCC’s investigation of Alamieyeseigha in Bayelsa, nothing was found on Jonathan,” wrote the author.

“Moreover, he did not do anything to obstruct the investigation or to encourage it, as many ambitious deputies would have done. This indicated that Jonathan could be trusted with power. Even more significantly, he was Ijaw. By making an Ijaw man vice president, Obasanjo would have taken a major step in redressing the cry of marginalization by the Niger Delta; and this would go a long way in restoring peace to the otherwise troubled region. Obasanjo would not need any further persuading. It was shortly afterwards that Odili was invited in and informed that he would not be announced as running mate that morning.

“Yar’Adua eventually read his acceptance speech, but was silent on the issue of running mate. For those unaware of the intrigues that had played out all through the night, there was nothing strange about this. The running mate did not have to be announced at the convention venue. It was also not unusual for a candidate to ask for more time to name his running mate. But by daybreak, the rumour mill had gone wild. Names had started flying around as possible replacements for Odili.

“Meanwhile, Odili’s team had busied itself through the night trying to prepare a response to some of the weighty allegations against their boss. They were ready by 10:00 am on Sunday morning, but by then the horse had already bolted from the stable.

“Without much fuss, Jonathan was invited to the Presidential Villa and informed of the decision of President Obasanjo and the party leaders to name him as the running mate to Yar’Adua. His immediate reaction was that he didn’t want to be Vice President. Some said when he first got wind of the decision earlier in the day, he had reacted the same way, saying he was happy as the Governor of Bayelsa State, which in any case, made more sense to him than this vice presidency business.

“However, with the combined force of President Obasanjo, Tony Anenih and Yar’Adua mounting pressure on him, he could not hold out for too long. By 4pm that Sunday, Goodluck Jonathan was announced as the running mate to Umaru Musa Yar’Adua in the 2007 presidential election.”

Abdullahi was fired as minister of sport in March 2014 by Jonathan allegedly on account of his “godfather”, Bukola Saraki, who had joined other party rebels in defecting to the APC.

He is currently the national publicity secretary of the APC.