Two years after the death of renowned NAFDAC reformer and former Minister of Information & Communications, Dora Akunyili, her husband Dr Chike Akunyili found two unpacked boxes of awards in her inner bedroom. According to the person who shared the photos, the awards are 110 in number. They have now been displayed like her other 820 awards. Impressive! 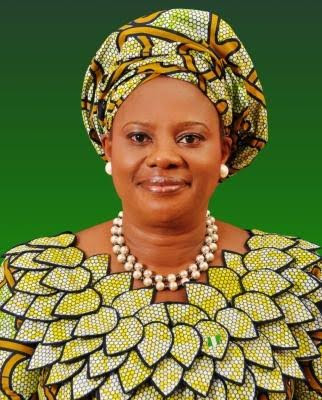 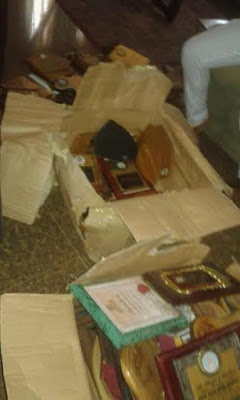 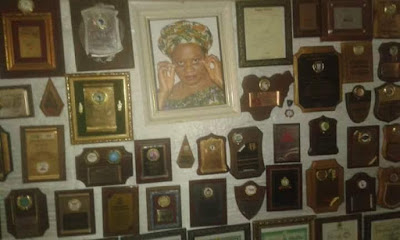 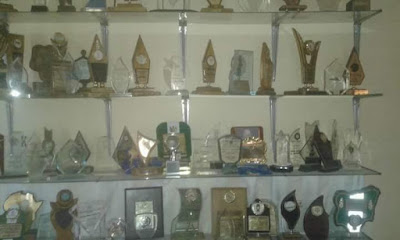 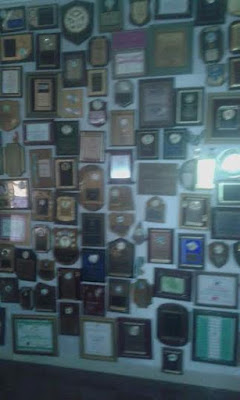 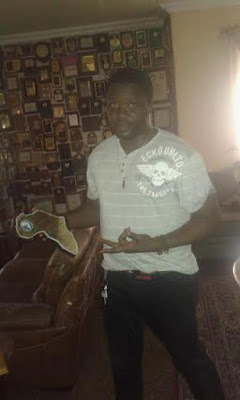 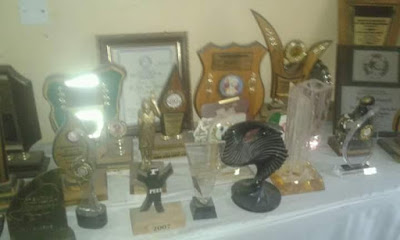 Dr Dora Nkem Akunyili  “the iron lady” b. July 14, 1954- Died June 7, 2014- ,was  a Nigerian internationally renowned pharmacist and the  former Director General of NAFDAC (National Agency for Food and Drug Administration and Control).  Her professional achievements, scholarship and commitment have been recognised over the years by many awards from organisations and governments in Africa, Europe and America, not least her nomination as one of the ‘Heroes of our Time’ by Time Magazine in New York, and the International Service Human Rights Award which she received at the House of Commons in London.

Dora Akunyili is a pharmacist, between violence and attempts at murdering her, she has, carried for many years  a war without mercy against the traffickers of false medical drugs in Nigeria.

For securit reasons, her family lives in the United States. She is the head of Nafdac, the Nigerian agency for the control of food and drugs. She is responsable for the war against fake drugs and is doing her job with the risk of losing her life.

Committed and decided, she says, with tears in her eyes, “False drugs, is the massacre of innocent lives and is a crime against humanity. We can protect ourselves against aids but we can do nothing against a deadly drug”.

When she started her job, 62% of drugs were not authorised and approuved, imported from China, India or manafactured in a clandestine factory from somewhere such as Onitsha in the south of Nigeria, where false drugs have been a speciality. Some of these “false drugs” contain dangerous substances, others are simply the original product which has been diluted in order for their taste to be the same, however the result is still the same

Dora’s sister, Vivian,  was diabetic and died from an injection of false insulin. Dora’s combat is sincere, the prizes and honors that she has been awarded, pinned to the walls of her office, ascertain her renown.

Born into a well off christian family in the state of Anabra in the south of the country, she was top of her class in school and after completing her studies in pharmaceutical studies, she did a Phd in Lagos and did special studies in London.

In 1995 she was named secretary responsable for the distribution of funds for people in need by a well known petrolium company. Suffering from a stomach infection and with a sum of 25 000 pounds, she was sent to London to be treated.

The English surgeon found that her infection was not serious and proposed to share her employers funds. She refused and returned the money to her employer.

The story got out and the president of Nigeria Olusegun Obasanjo heard about it, in 2001 he appointed Dora as head of the Nafdac.

Contrary to her predecessors, she took her mission to heart and declared war on the “merchants of death”. She limited drug imports to two sea ports and two airports, she used inspectors in China and India and put 31 manafacturers on a black list , taking action on 800 different accounts against specific sales and local production. She didn’t have to wait very long for their reactions, she was almost immediately offered 1 million dollars as a bribe to stop her actions.

She refused and they menaced her, shedding corrupt employees, she had to get rid of 300 members of staff over a period of six years (out of a total of 3 000 people), including her brother in law. Her son was the object of a kidnap attempt and then professional killers were sent after her. In August six armed men entered her home, she had changed plans at the last minute.

A year later the Nafdac laboratories were burnt down. According to her agenda she had an appointment there. On 26 December 2003 as she approached her home, her convoy was attacked and a bullet went through her air and burnt her scalp, the driver of the bus was killed.

Marcel Nnakwe is the most important producer of false drugs in Nigeria, he has created a massive fortune and has been assisted by key elements in the police and legal system. He has been arrested several times and has always been let out.

The results of Dora Ayunkili’s efforts have born fruits, the figure of 62% of false drugs has dropped to 20%. Onitsha was raided at the beginning of and 700 policemen removed 80 truckloads of counterfeit drugs.

They have managed to get the Indian and Pakistani under control, this is proving to be more difficult in China.

copy drugs are rife and easy to obtain, the authorities are doing nothing to control exports, even false drugs.

Dora Akunyili did not resign on 29 May when président Obasanjo’s stopped being president, instead she has stated that she wishes to see Marcel Nnakwe’s downfall.