3 months after Sendcash was launched to enable people credit naira accounts with bitcoin, the platform has crossed the N1 billion mark in remittances sent to Nigerian bank accounts.

That’s approximately the cost of 270 Bitcoins.

While Sendcash was launched by Buycoins, a cryptocurrency trading platform, one doesn’t require a Buycoins account to use Sendcash. The product can be used to transfer money using Bitcoin via Coinbase or Cash App.

Btw @SendcashAfrica has crossed N1bn (it’s at N1.147bn) received by Nigerians via #Bitcoin.

There’s so much we need to improve but we launched in April & we’ve crossed N1bn.

The maximum amount that can be transferred daily is $1,000, in compliance with the CBN anti-money laundering policies.

As of June 24, the amount received through Sendcash was N500,000,000. But between June 24 and July 20, about N647,000,000 was transferred into naira accounts from the diaspora, showing increasing usage by people who have Bitcoin but want to transfer into Nigerian bank accounts at more favourable charges.

Nigerians have received half a billion Naira from all over the world with @SendcashAfrica. 🚀 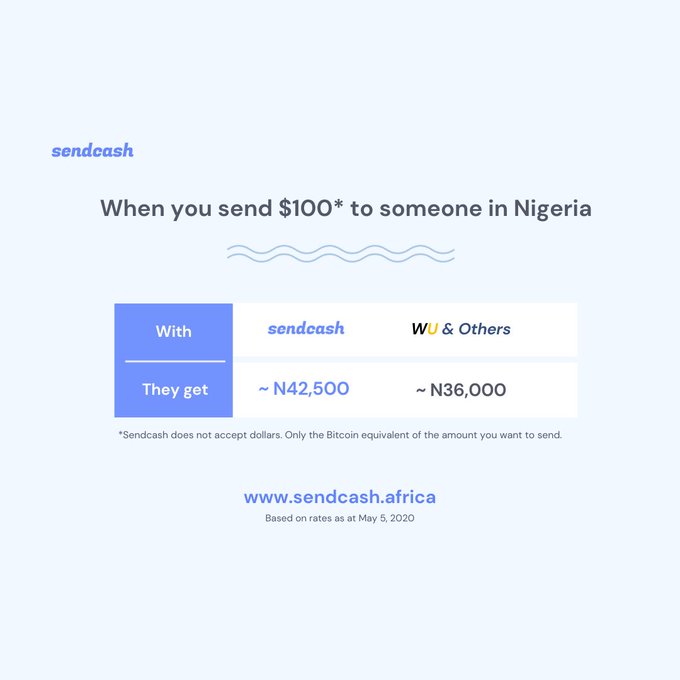 In February, the price of Bitcoin fell below the $9,000 and $10,000 mark where it had hovered for long. But with coronavirus negatively impacting stock prices and global stocks falling rapidly, more people turned to Bitcoin to store more of their assets. The negative effects of the ongoing pandemic, however, still managed to catch up with crypto prices.

In March its prices plunged even lower, reaching $5,678. However, the digital currency made a rebound in April, seeing a price surge of $9,300 after its previous low performances.

In May, Bitcoin halved. The halving meant that people who mine Bitcoin will receive less reward for their mining. Before the halving occurred in May, miners received 12.5 coins per block mines but now that reward has been reduced to 6.25 coins per block. The halving, which takes place every four years, will happen again in May 2024.

Crypto-scammers have also had a good run so far. In the first six months of 2020 alone, Whale Alert reported that scammers stole $24 million worth of Bitcoin from victims. Social media has increasingly become a sure platform to target people for potential crypto-scams.

People were asked to send Bitcoins to a specified address for the goal of receiving double via the Twitter accounts of these individuals who are trusted and followed by a large number of people.

More people are embracing Bitcoin and other cryptocurrencies as a means of storing more of their assets. While it raises the need for security and regulation, the increase in adoption is also pushing the growth of startups like Buycoin and products like Sendcash that provide a way to send Bitcoin to people that will receive it in Naira.