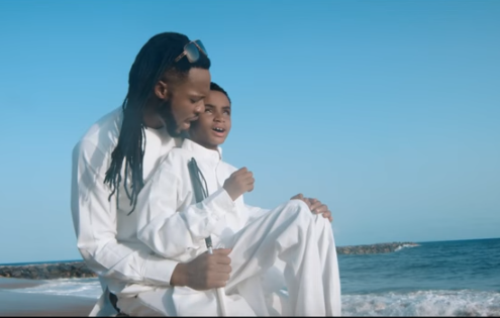 Little did he know that he was to have a big impact on Semah Weifur’s life.

According to a speaker at the event where they met, Semah’s ultimate desire was to come in contact with the highlife singer.

To prove how much of a fan he was, the boy got the tough task of singing one of Flavour’s songs in the Igbo dialect.

His performance of the song prompted Flavour to say: “I made a new friend Semah G. Weifur. He’s blind and sang my songs better than me.”

It was moving and inspiring but it didn’t end there.

The boy who simply wanted to meet his favourite artiste and idol now has an official collaboration with him – his dream becoming a gift that keeps giving.

Flavour this week released the video of the collaboration, ‘Most High’, a single off his ‘Ijele- The Traveler’ album.

Since its release, the song has been met with acclaim and acceptance by fans, on the internet and beyond.

In addition to having a lovely voice, Semah’s ability to fluently sing in the Igbo dialect is uncanny.

Today, the video has been viewed over 700,000 times on YouTube since its release six days ago and the comment section has never been this united on one thing – praises.

One respondent, Jaff Peter, said, “Who else is or was super touched at 3.12 when the little boy raised his hands up like he’s playing a guitar and cried to God like he’s seeing him. At that moment I knew he had seen God. Tears ran down, this song is a message. Be happy with what you have, how many people can see but yet can’t praise God”.

Another, Jehoaikim, weighed in on the recent controversy between the federal government and the entertainment industry, saying, “ministers want to ban our musicians from shooting videos outside the country…If he hadn’t gone out on a tour or for a video shoot how would he have discovered a brilliant dynamite, hidden talent like this waiting to explode”.

Some even advised the singer/songwriter to stick to the genre of the new track, away from his well-known Igbo highlife.

“Flavour please channel your type of music to gospel music…God needs you more than the pleasures of this world…bless you!” Thelma Nkechi Kalu beseeched.