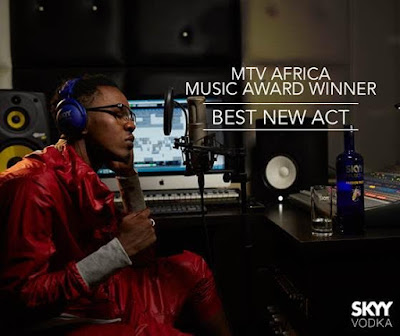 Skyy Vodka is planning to hold a grand reception to honour its brand ambassador, Patoranking, who recently won the coveted Best New Act award at the MTV Africa Music Awards (MAMA) held in South Africa over the weekend.

Patoranking displaced other African top artists, including Stonebwoy (Ghana), Cassper Nyovest (South Africa), Duncan (South Africa)and Anna Joyce (Angola), all of whom were nominated for this highly coveted category in the MAMA awards.

As part of the big plans to appreciate MAMA and the entire Africa continent, the brand ambassador will be giving away 54 bottles of Skyy Vodka, representing the 54 countries in Africa whose artistes the MAMA awards seek to project to the rest of the world.

It will be recalled that Patoranking, on his way to the MAMA awards, interfaced with his numerous fans at an album-signing ceremony in Lagos, sponsored by Skyy Vodka.

At the ceremony held at Drinks.ng Stores, Patoranking expressed his appreciation to Skyy Vodka for creating the needed platform for him to connect with his fans.

In December 2014, the brand ambassador also defeated all contenders to emerge the Next Rated and Best Reggae Single in the Headies Award and took home the star prize of a brand new car.