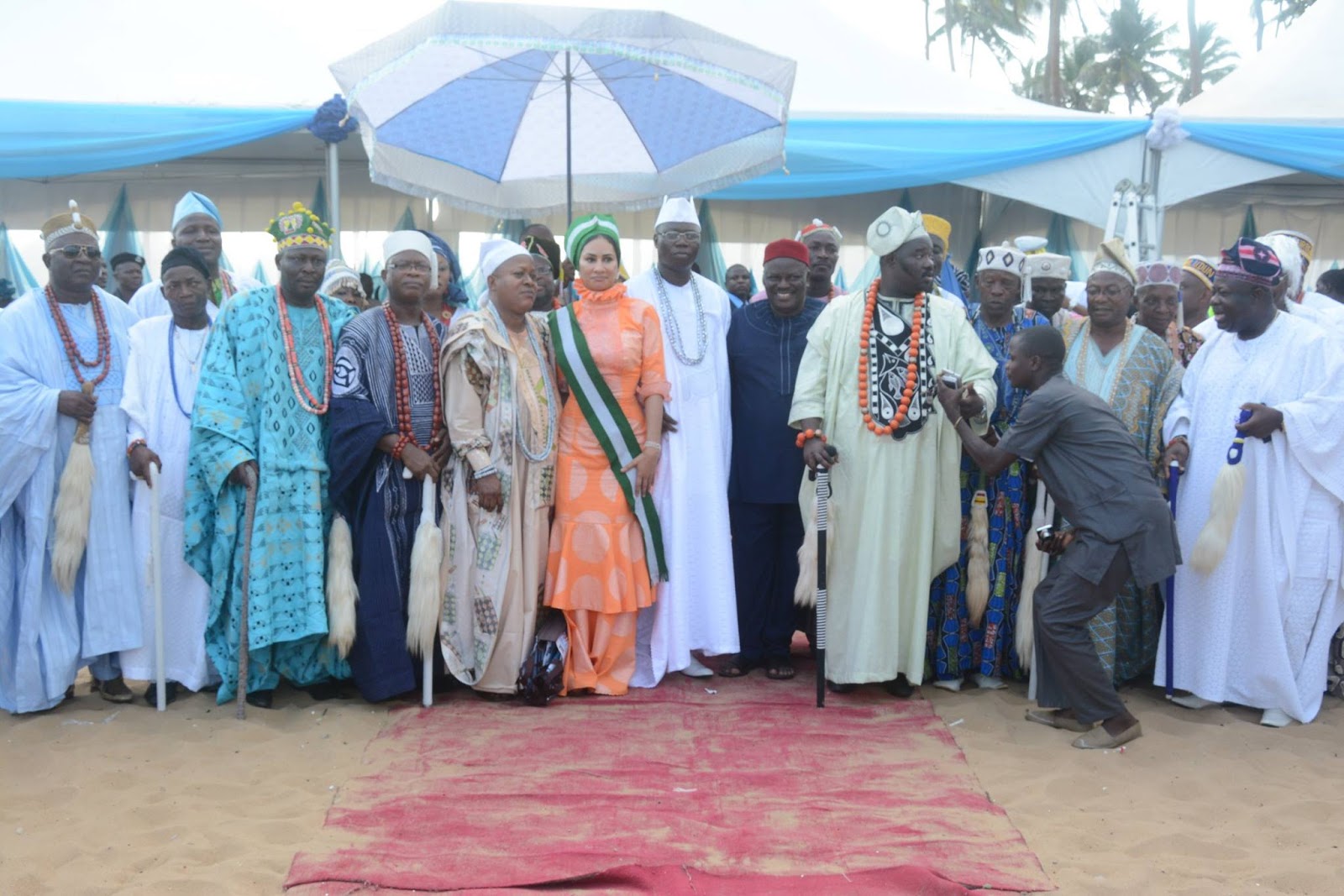 The famous Olokun festival was celebrated amidst glitz and glamour spanning a week of cultural festivities in Lagos. Zacheaus Somorin who covered the events, reportsEverything good that has a beginning must have an end. This aptly describes this year’s Olokun Festival, themed “Traditional Festival
and the Prospects of Cultural Dividends”.

The festival kicked off on October 1, 2015 with prayers to Almighty God at Lagos Airport Hotel, Ikeja and had its grand finale of the Olokun Festival on October 22 at the Suntan Beach, Badagry, Lagos.

A press conference was held at White House, Hotel in Ikeja to highlight the programme of events while an art exhibition came up at
the Centre for Black African Arts and Civilization (CBAAC) in Lagos.

The next event was the Yoruba quiz competition where students from various schools displayed their understanding of the Yoruba culture.

Similarly, Miss Onayemi Olamide, an undergraduate of Babcock University defeated 14 contestants to emerge as winner of the Olokun
Beauty Pageant 2015. She won a car and cash prize. Others went home with consolation prizes.

During the lecture that heralded the festival, Dr. Enomhen Sylvester, a Senior Lecturer at Lagos State University and guest speaker, in his lecture titled ‘Cultural Heritage and Modernity in Nigeria’, said that culture was the way of life of Nigerians.

He urged the youths to understand their cultural practices and ensure that they abide by them.

In his remark, National Coordinator Oodua People’s Congress and Chief Promoter Olokun Festival Foundation, Otunba Gani Adams, explained that the lecture was designed to educate people about the advantages of taking culture seriously and also to help identify and highlight the associated challenges in modern time.

“Our choice of theme is also informed by the need to direct our common consciousness to the positive and negative impacts modernity,
civilisation continue to have on our culture. “By our culture and other vultures it is our intention to use this lecture to address not only the cause of this impact.”

At a meeting with 75 traditional rulers from South West and Republic of Benin at the Olosa Gala Night, Otunba Gani Adams urged them to protect the culture and tradition of the land and not neglect because politics or monetary gains.

“This act has made some people to disrespect some traditional rulers while some of them have been dragged to court,” he said.

“Festivals belong to the traditional rulers in Yorubaland. It is your responsibility to lift the culture and tradition, don’t abandon this because of politics.”

Representative of Akran of Badagry, High Chief Agoloto of Badagry revealed  that the continuous celebration of Olokun Festival in Badagry by Otunba Gani Adams has brought about many good things to the people of Badagry, such as the largest Sea Port in Africa which was recently located in Badagry, the discovery of Petroleum products and Gas in about five places which will last for more than one hundred and sixty years.
At the grand finale, Adams said the culture of religious observances and traditional festival celebrations hold a pride of place and are held sacrosanct by the Yoruba people.

“Among our people, the respect for deities are anchored on the belief in their importance permeates all facets of the religious rites of the Yoruba.

“Likewise, the veneration of these deities through festivals call for our attention to their significance in sustaining unity, peace and prosperity in our communities.”

He told the gathering that Olokun is derived from oni-okun (the owner of the sea).

“Olokun is the sea-god lord of the sea. Olokun is the chief god of not only for fishermen and everyone whose livelihood is eked from the sea; he is the principal deity of everyone that lives close to the sea.

“It is Ndem Mmo among the Efik and the Ibibio while in Gaa language in
Ghana, it is Farr Ingmo.

“Beyond Africa, Olokun festival is celebrated in the Diaspora and it is among the belief treasures of the Yoruba that survived among the descendants of enslaved Africans in the Americas.”

On the theme of the festival, Gani Adams reiterated that cultural and
religious tourism can augment and provide alternative source of revenue for Nigeria.

Dean of Arts, University of Lagos, Prof. Muyiwa Falaiye, in his lecture, noted that festivals are mostly celebrated to propagate the cultural heritage of a people and they come in various forms.

“When a festival is a national one, it aims to imbue in citizens of
that country the spirit of patriotism and solidarity.

“When it is religious, it promotes amongst the diverse adherents of that religion a feeling of brotherhood and universal affiliation relative to the other world.

“In the celebration of any of these festivals, interpersonal barriers and structures imposed by existential divides as well as the rules and norms of everyday life are suspended.”

“They enable people reach out to, and appreciate, their history, by making them appraise their past and see how it affects their present, manage their past through critical reflection and visionary action, and thereby prepare them for their future.”

The Director General, CBAAC, Sir Ferdinand Anikwe, said “I am a great lover of the Yoruba culture and what Gani Adams has started other
Nigerians should emulate him.

“It is good that when you attend other carnivals in the world, you would observe that those carnivals took off from Nigeria.

“We are trying to lead the world through our culture and our best is yet to come because culture will improve the Gross Domestic Product
(GDP) of the country”, he added.

DG, Nigerian Tourism Development Commission (NTDC), Sally Mbanefo agreed that culture contributes to the GDP of any country and tourism
is the greatest employer of labour.

“Festivals like Sango festival, is celebrated in over 40 countries in the world and Yoruba culture has been exported to other countries in
the world.

“Let us not forget our language and wherever we find ourselves, parents should teach their children their language because it is their
cultural heritage. A country without a culture is a country that has
no history”.

Pix caption: Otunba Gani Adams, the Chief Promoter of Olokun Festival with other dignitaries at the grand finale of the Olokun festival in
Badagry, Lagos 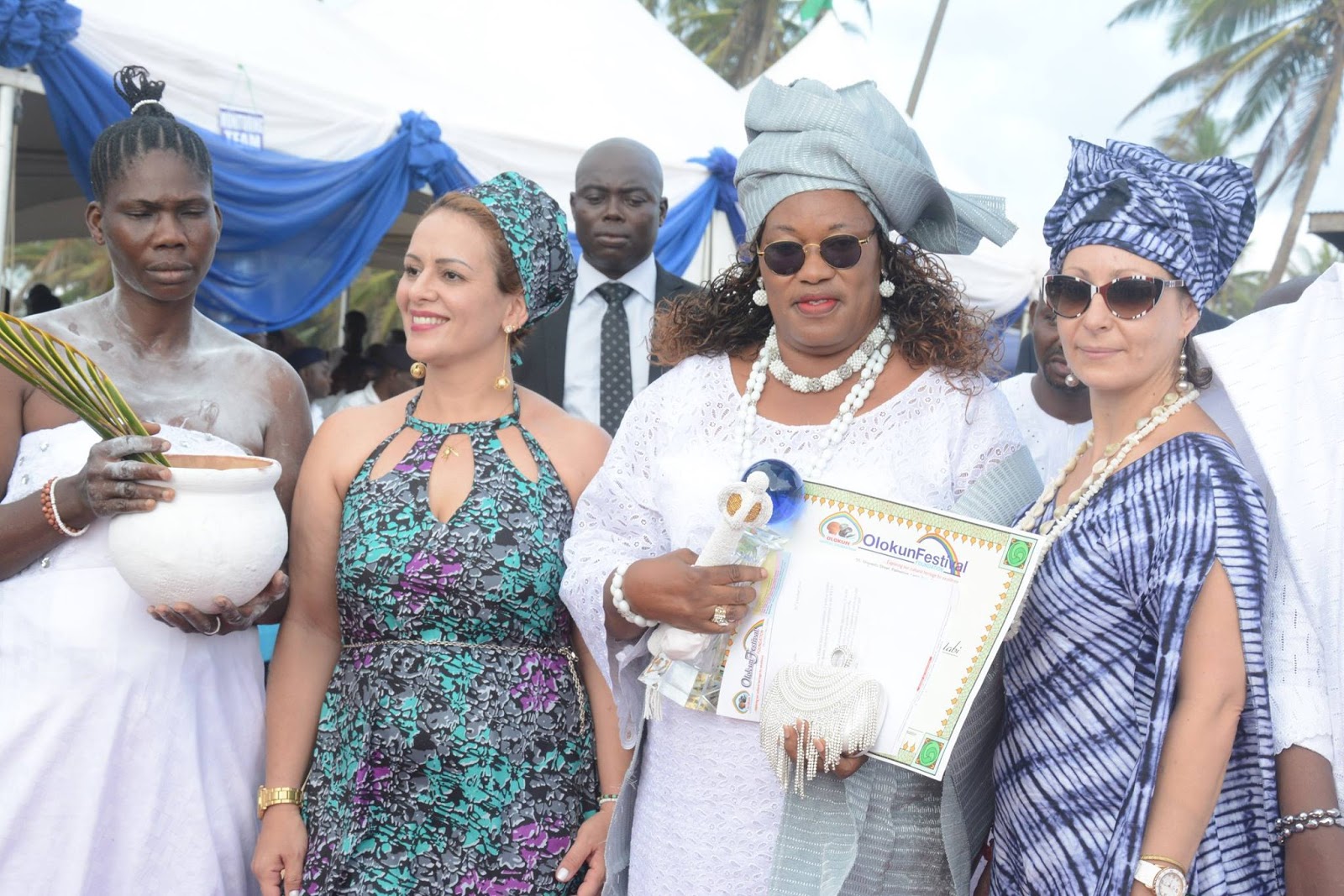 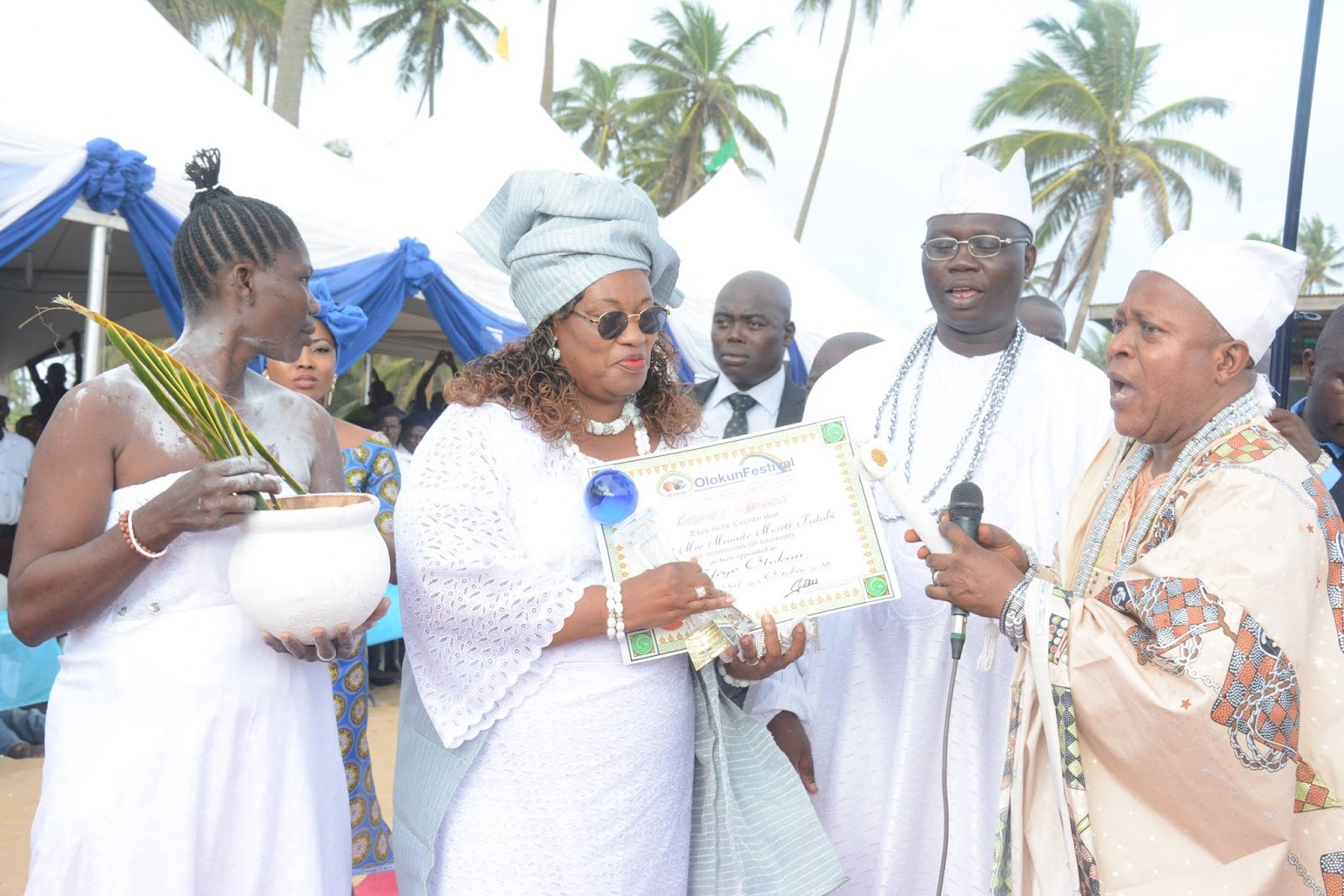 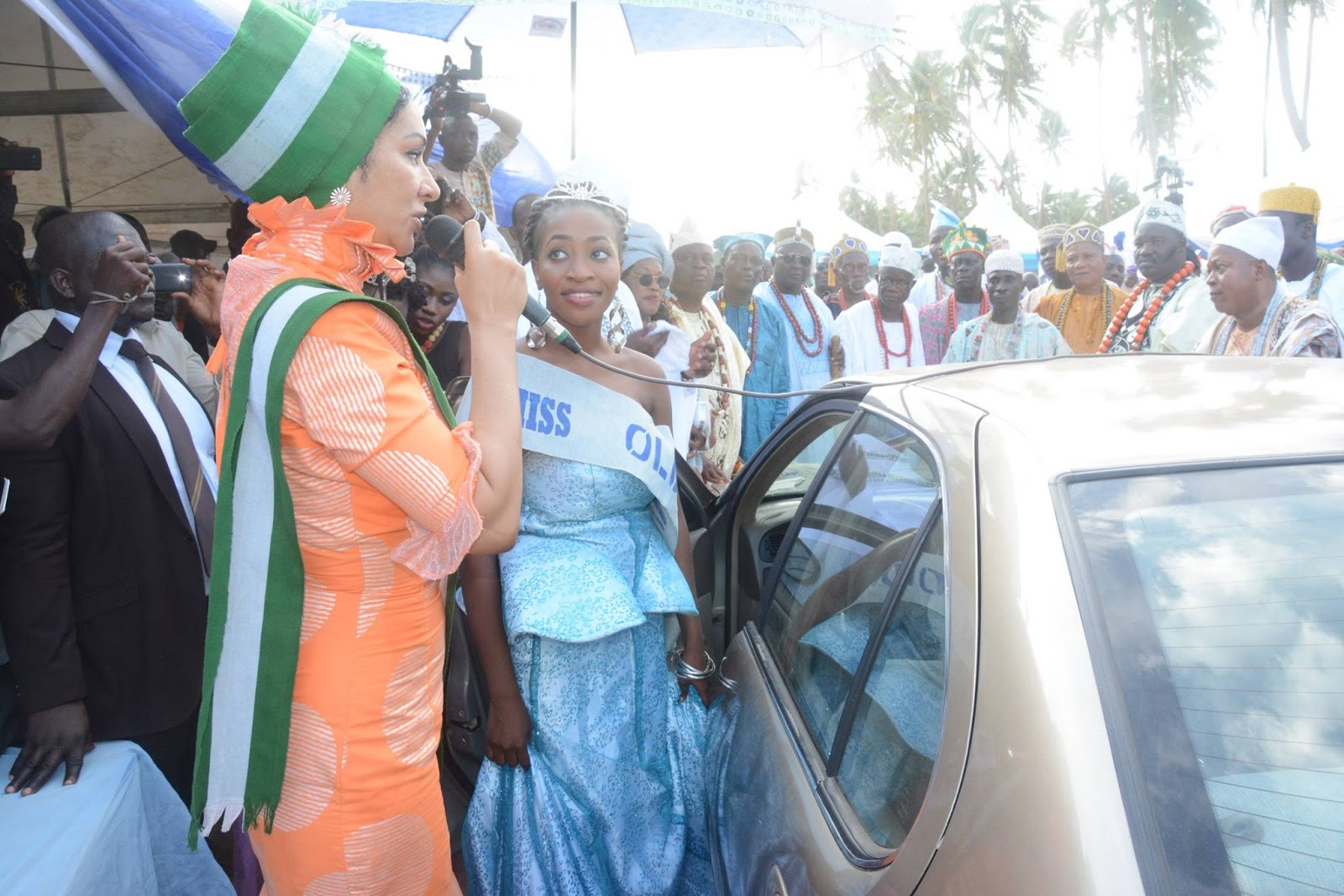 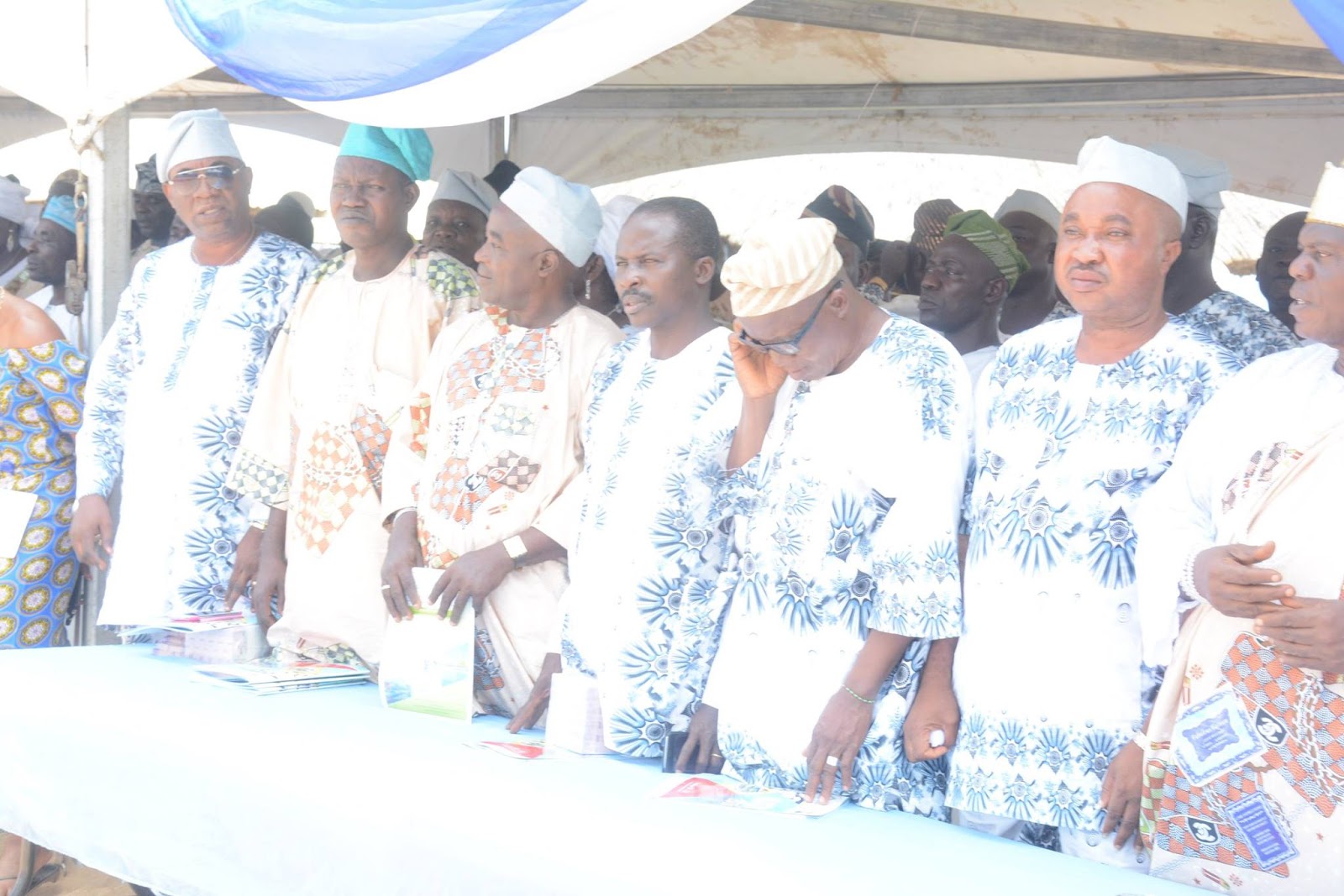 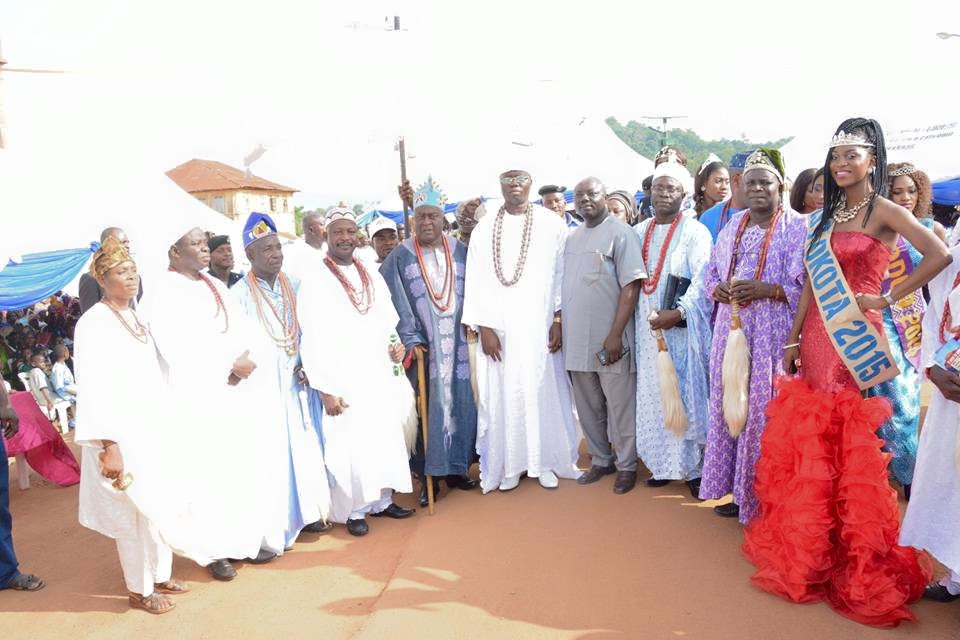