Bori in Hauseland in one word cand be described as a spiritual ritual used for different purposes such as healings, etc.

Bori is a traditional religion of the Hausa people of northern Nigeria which involves animism, magic and spiritual possession. The Bori religion was widely practiced in the Hausa’s pre-Islamic era but began to wane as Islam was introduced into Hausaland. “Boorii” is a Hausa word for spiritual force which can be found in physical and/or inanimate objects. The Bori religion wields the power to control these forces through spiritual dance, rituals and music. These spirits or forces are controlled and used for many things like healing, protection and bringing luck on people or the society. The religion has so many spirits which are named (e.g. Daudu) and have specific powers. The royal priestess of the Bori religion is called ‘Inna‘ translated as “mother of us all”. She leads the other members of the religion in spiritual dances and rituals. She also plays an important role in the cleansing and protection of the society from evil forces, and the provision of healing and divination. 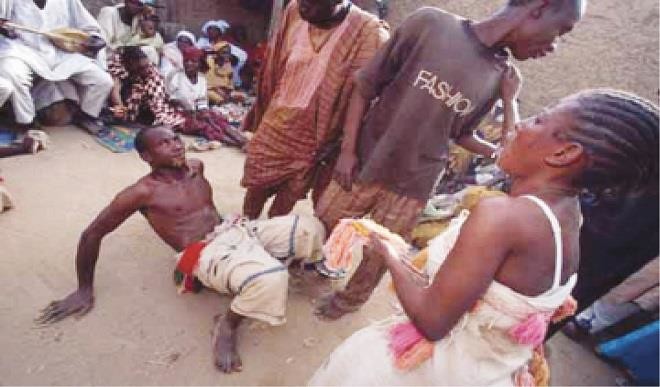 The Bori priestesses and other members showcase their prowesses during Bori festivals like the Girka initiation ritual.
An account was given by a researcher based on the way the Bori spiritual dance is performed. It goes this way:
“The Bori folk gather for the dance in the afternoon about two hours before sundown. Soon the sounds of fiddles (Goye) and guitars (Molo) strike the ear, accompanied by the calabashes (Koko) either beaten with sticks or, if furnished with grooves, held before the player’s chest, who scratches them with his nails in turning them round and so produces a humming sort of sound. Then the Magadja rises to her feet. She wears two girdles of cloth (called [564] Damara), in which the amulets are sewn, knotted together over her breasts and hips and in her hand she holds a slender rod of bronze.

Scarcely lifting her feet from the ground, she steps slowly forwards her movements soon get more lively and she follows the accelerando music by beating its time on the ground with the soles of her feet. Suddenly she makes a leap and falls on the earth with her legs spread apart, only to get up and repeat this performance. A large mortar is brought along. The Magadja gets on to this and ventures the jump as aforesaid also from this, shaking the firm earth as she falls on it. She does this three or four times, until she falls exhausted into the arms of her attendants, who comfortingly cover her with cloth while the hitherto breathlessly gazing crowd thanks the dancer and musicians with an ample largesse of cowrie and kola”. (The Bori Magadjiyar: Max Dashu- suppressedhistories.net)
Bori priestesses

As stated earlier on, the introduction of Islam into Hausaland faded the practice of the Bori religion. The roles and functions of the priestesses disappeared or were passed unto Islamic institutions. However, in Hausaland till today, many Bori members still refer to themselves as Muslims, while some Muslims also make use of some aspect of the Bori religion to keep their homes safe from evil spirits (Jinn).

The Bori religion is still being practiced today in some Hausa areas like Kooni and Dogondutchi, presently the south of Niger.