The Nigeria Football Federation has finally reacted to the bribery scandal involving Super Eagles coach, Salisu Yusuf. Yusuf, who is an assistant to Coach Gernot Rohr in the main Eagles team, was filmed collecting a bribe from an undercover Ghanaian journalist, Anas Aremeyaw Anas, who posed as a football agent. 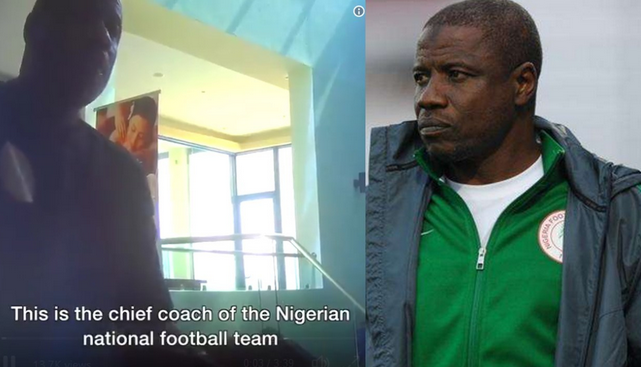 The video was published by the BBC as part of a documentary involving similar scandals in other African countries.

After initial silence, the NFF said on Friday, “For now, the NFF has commenced preliminary investigation into the matter to assist the Committee on Ethics and Fairplay.”

The short statement was signed by NFF’s director of communications, Ademola Olajire.

On his part, the embattled coach remained resolute that he had not erred in anyway despite being filmed collecting money.

In his prepared defence, Salisu, who is undergoing medical treatment in London, said he neither asked for the money nor did he promise the agents he would pick the players because of the cash they gave him.

He instead claimed that players were picked on merit and their consistency.

“There is nothing in the allegation pointing to a demand for the money from the agents of the two principals. Rather, the agent only handed the money to me after expressing ‘hope’ that the principals would play in the Championship.

“Be that as it may, I did accept cash handed to me by one of the said football agents, which I later discovered, upon checking, to be $750 and not $1000. Nonetheless, my understanding of the FIFA and NFF Codes of Ethics, particularly Sections 20 of the said codes, is that, gifts of any kind could be accepted by persons bound by the codes which are: of symbolic or trivial value; exclude any influence for the execution or omission on an act that is related to one’s official activities or fall within one’s discretion; are not contrary to one’s duties; do not create any undue pecuniary or other advantage and do not create a conflict of interest,” the coach defended.