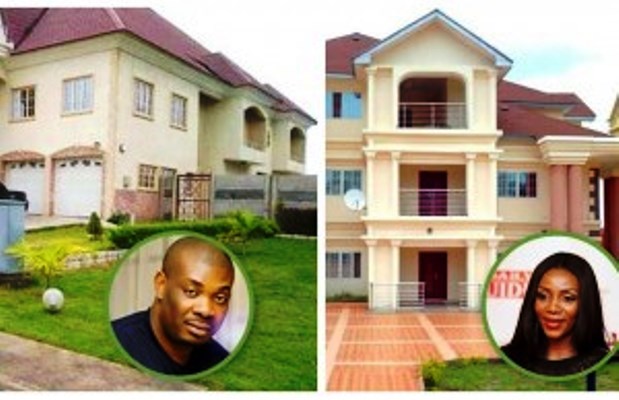 Movie veteran, Genevieve Nnaji is one of the most highly respected actresses in the Nigerian Entertainment industry today. The actress who started from the bottom and has gotten to the top doesn’t seem like she’ll be leaving that spot anytime at all.

The 35 year-old mild actress is one of the very few actresses who actually own their own mansion. Hers reportedly costs N220million. Her N220million Mansion is located in Park View Estate, Ikoyi, Lagos… It’s also been reported that the enchanting actress owns a mansion in the Republic of Ghana as well and that she acquired it earlier this year. City People magazine reported on February 23, 2015, that the 35 year old actress who is being referred to as the ‘Julia Roberts’ of Nigeria Entertainment, according to American media mogul Oprah Winfrey, is the new owner of a mansion in Accra, Ghana which cost $4M. It’s been claimed that the mansion is located at the Achimota area of Ghana which she prefers to the East Legon area of the country.

It’s arguable that David Adeleke popularly known with his stage name, Davido is one of the most hardworking and most popular musician in the country today. He is the son of Billionaire, Adedeji Adeleke who came into Stardom when he dropped his first studio track “Back When” and released the hit song “Dami Duro” in 2011. Davido has made quite a fortune from his music and also boasts of his own self acquired Mansion. One time when he spoke about his Mansion, he said he recalls how small his room was in school (Babcock University) compared to his mansion home which only took him 2 years of his hard work to acquire.

The mansion which is located in an exquisite area of Lagos State, Lekki, costs about N140Million.

The P-Square brothers, Peter and Paul Okoye have come a long way to become what they are in the Entertainment Industry today. After years of hardwork and making good music, the duo can boast of 3 Square Ville Mansions.

They own mansions in Omole, Ogba, Lagos, and reportedly have another in San Francisco, United States and yet another one which should be nearing completion near Parkview Estate, Lekki Lagos.

The Don Doro Bucci himself, Michael Collins mostly referred to as Don Jazzy is one of the most highly respected musicians in the Nigerian Entertainment Industry today. From the time of being a member of JJC’s Backbone Music group in the U.K down to owning his own record label, Supreme Mavin Dynasty SMD which has some of Nigeria’s biggest acts signed under it. Don Jazzy is one of the country’s most prolific music producers and he is no doubt, one of the most influential Producers in the continent. Dondorobucci has a mansion of his own which costs N160Million which he acquired in 2012.

He’s still that “Plantain Sellers seen in one of these photos, Timaya poses by his mansion with a plantain on his hand signifying that he is still that hustler that used to sell plantain on the streets of Bayelsa. Enetimi Alfred Odom is an indigene of Bayelsa State, a state close to PH City, the capital of Rivers State.

The artistes chose to build his homes in Port Harcourt probably because of a better return on investment and because of his attachment to the famous Garden City having grown there. The singer reportedly owns two mansions in Port-Harcourt and has only flaunted one of them recently. He acquired the first mansion in December 2011 and acquired the second one 3 years later.