Geology shapes our planet both on global scales and on regional and sub-regional scales. Here I will discuss global scales and therefore will undoubtedly leave some pieces out. I hope that pushes you to study the world map and see how geology has affected your continent, country, state, city, and even neighborhood.

Political Map Of The World

There are a variety of world maps that provide different services to the reader and allow them to interpret different aspects of Earth. The map that you likely see the most often is the political world map that provides information on country borders and capitals. The map below provides clues to how Earth is shaped and where political boundaries are drawn. 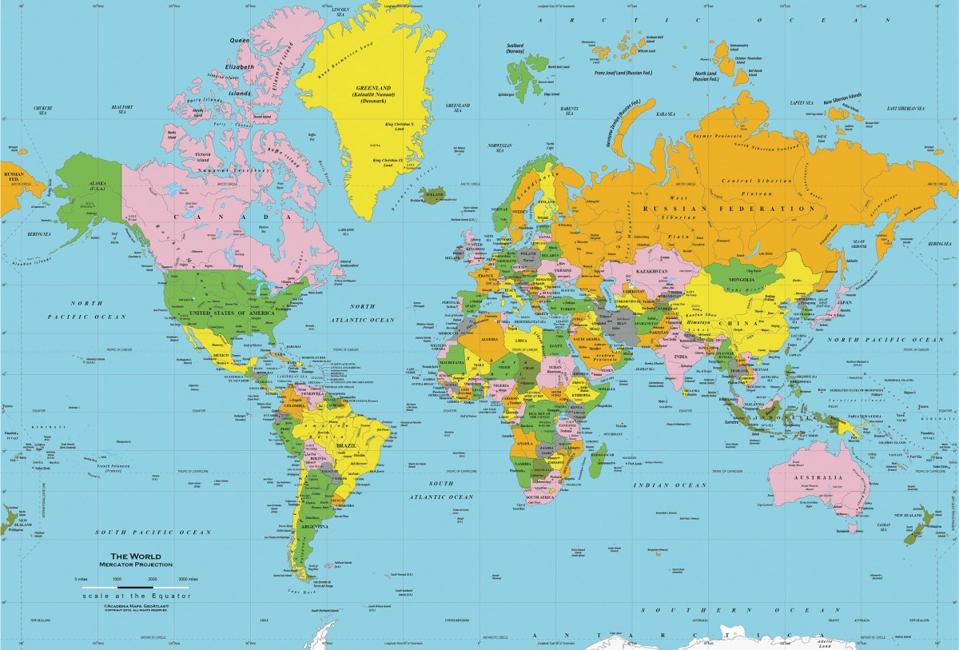 The oceans that surround continents are an obvious factor in determining natural political boundaries, with several exceptions. However, why is it that we have a giant ocean in between North and South America and Europe and Africa? This ocean, the Atlantic Ocean was formed during a giant rifting period where the supercontinent of Pangaea was ripped apart by the stretching and eventual formation of the Atlantic Ocean. Do you notice in the map that the east coast of South America looks as though it fits rather nicely into the west coast of Africa like a puzzle? That is because they were once the same landmass as Pangaea. Rifting caused the continent to break apart where new mantle material was injected onto Earth’s crust. This formed the Atlantic Ocean and continues today in the Mid Atlantic Ridge which spreads at a rate of 2.5 cm/yr.

This process of rifting has formed many of the oceans we see today, is part of global plate tectonics, and is a major factor in determining boundaries in the world map we see today. In a similar yet parallel feature, the Mid Pacific Ridge is constantly building new oceanic crust. Since the area of Earth’s surface is static, creation of oceanic crust must be equally met with destruction of oceanic or continental crust. Destruction of oceanic crust occurs along the boundaries of the Pacific Ocean, known as the ‘Ring of Fire’ for the volcanism that surrounds the eastern and western edge of the Pacific.

Furthermore, geology dictates where mountains, oceans, and rivers appear on Earth’s surface and therefore is a driving factor in determining the lay of the political world map. Often times, rivers will seek natural weaknesses in the underlying crust along faults or softer sediment. Rivers exploit this weaker crust to cut a pathway, eventually leading to an ocean hundreds or thousands of miles away. The Pyrenees Mountains divide France from Spain and were formed as part of an orogenic system where Iberia and the southwestern European Plate collided forming the mountain range.

The next world map that is shaped by geological forces is a topographic and bathymetric map. The map below shows both the topography of the continents and bathymetry of the oceans. The darker blue indicates deeper oceans while lighter blue indicates shallower oceans or seas. Meanwhile, on continents the lighter greens is closer to sea level and lower, while the yellows and reds are higher mountain ranges and ice sheets.

As noted above you can see what appear to be sutures in the ocean floor along the Atlantic Ocean, Pacific, and Indian Ocean among others. These sutures are the mid ocean ridges that expand and build oceanic crust. However, there are a vast number of additional conclusions one can make from the map. 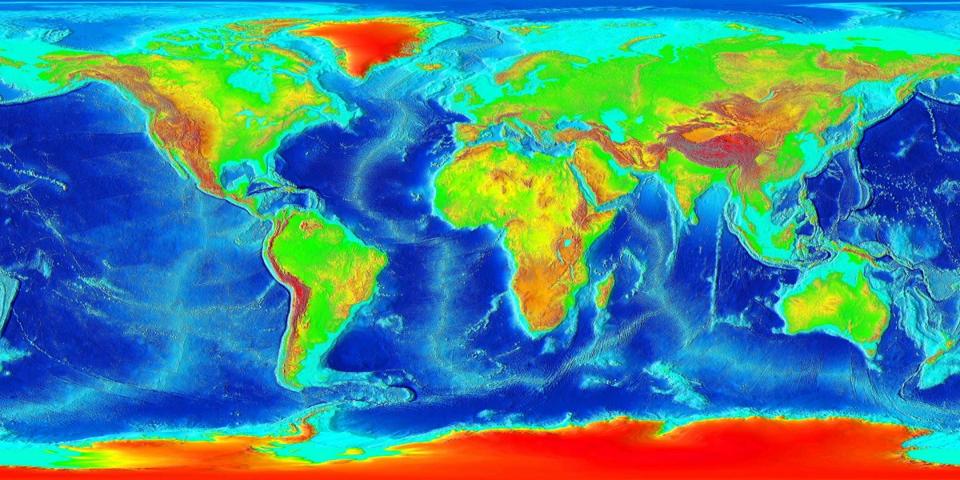 Another fascinating feature of Earth’s topography is the high and relatively flat plateau feature to the north of India. This is the Himalayan Mountains and the Tibetan Plateau to the north. This vast area has been pushed to an average elevation of 4,500 meters (14,700 feet) as a result of plate tectonics. The Indian Plate broke away from Gondwana (an ancient supercontinent) 100 million years ago and began to travel north. The Indian Plate began to collide with Asia 55 million years ago and in the process formed the Himalayan Mountains and the Tibetan Plateau. Since both plates are continental, one didn’t ‘sink’ underneath the other but they crashed into one another like an accordion and therefore pushed the continental crust to new highs.

Geology has shaped the coast of Saudi Arabia, Egypt, Sudan, etc. through a failed rift. You will notice that there is a strange V shaped feature of narrow ocean between the countries. It almost looks like someone took a knife and cut a pathway through the countries. This is a failed rift, similar to the Mid Atlantic Ridge, but it never formed into anything more than a narrow seaway. This failed rift formed the Red Sea and the Gulf of Aden.

In many ways the continents we live on are moved and jostled around by oceanic crust. However, this is veiled power as the oceanic crust and ocean ridges are formed from mantle dynamic. The thin veneer of our continents and oceans are no match for powerful mantle convection and circulation.

Viewing a satellite image of the world you can’t help but notice the vast differences in color, from dark greens, to white, to light tan, and deep blue. The satellite image below provides interesting clues into the climate and biodiversity of the world. For instance why is the eastern edge of the Andes dark green and host one of the most biodiverse places in the world in the Amazon Rainforest? Meanwhile, the east of the Rockies is dry with desert terrain. Why is there a vast desert in northern Africa and the Middle East at the same latitude as the tropical Caribbean and Thailand? These are all answered by a mixture of geology and ocean/atmospheric circulation.

Rain shadows are common anywhere there are mountains and are the reason we often see one side of a mountain range having a lot more rainfall than the other side. In a very basic sense, the mountains force air to rise as it passes over the peaks of the mountains. When this happens the air cools due to less atmospheric pressure the air adiabatically cools and reaches the dew point. This creates precipitation and in essence ‘wrings out’ the air of its moisture as it is uplifted over the mountains. Once the air reaches the other side of the mountain range it is dry and retains little moisture. 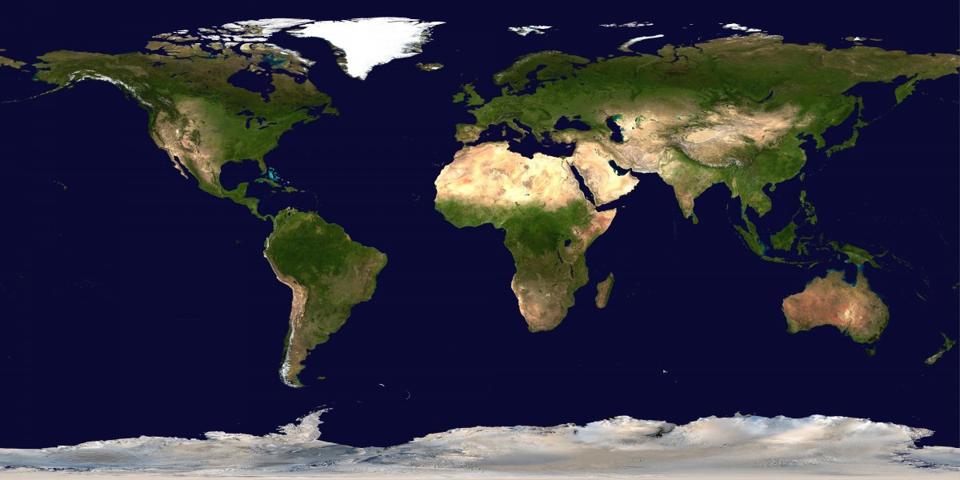 Rain shadows exist around the world as you can see on the world map above. Most notably, we see a rain shadow north of the Himalayan Mountains on the Tibetan Plateau, The western edge of the Andes Mountains along the Atacama Desert and the Basin and Range Province of the United States. In fact, the Atacama Desert is the driest non-polar place on earth receiving only 15 mm (o.6 inches) of rain per year. However, there are parts of the Atacama that have never received rainfall throughout the lifetime of local weather monitoring stations.

You may be asking yourself how then do we see the massive desert in northern Africa since there are no mountains responsible for a rain shadow. The Sahara Desert is the largest hot desert in the world and third largest behind Antarctica and the Arctic. The Sahara remains dry due to its location on the planet relative to high and low pressure systems. The Sahara is defined by the Horse Latitude it sits within, a band of high pressure that surpasses precipitation and cloud formation. The constant high-pressure air descends down on the Sahara Desert, causing warming and drying. The absence of rising air, which causes cooling and condensation, vastly prohibits rainfall in this region.

One of the more interesting roles geology has played on the world map is the closing of the Isthmus of Panama, a narrow strip of land that formed the link between the North American and South American continent. Volcanism formed land in Panama that was previously absent and thus created a land bridge between the two continents. 12 to 15 million years ago, what was previously two distinct pieces of land were bridged into one landmass. This allowed for an explosion in biodiversity as plants and animals from the two continents migrated north and south.

How We Collectively View The World Map?

Despite how geology shapes the world map, humans shape the map as well. In a recent study by Zak Ziebell as part of a school project, 30 participants at the University of Michigan were asked to draw a map of the world by memory. Zak then overlaid the 30 maps to create a general impression of Earth as those 30 participants saw it. Of course the results were a bit biased toward North America, however the results show a combined interpretation of a world map. Zak then covered the combined map with a Photoshop layer of NASA’s satellite imagery of the world. You’ll notice India is weirdly missing or just blobbed onto Asia, as well as Greenland, New Zealand, Madagascar, as well as the Arctic and Antarctica among others. 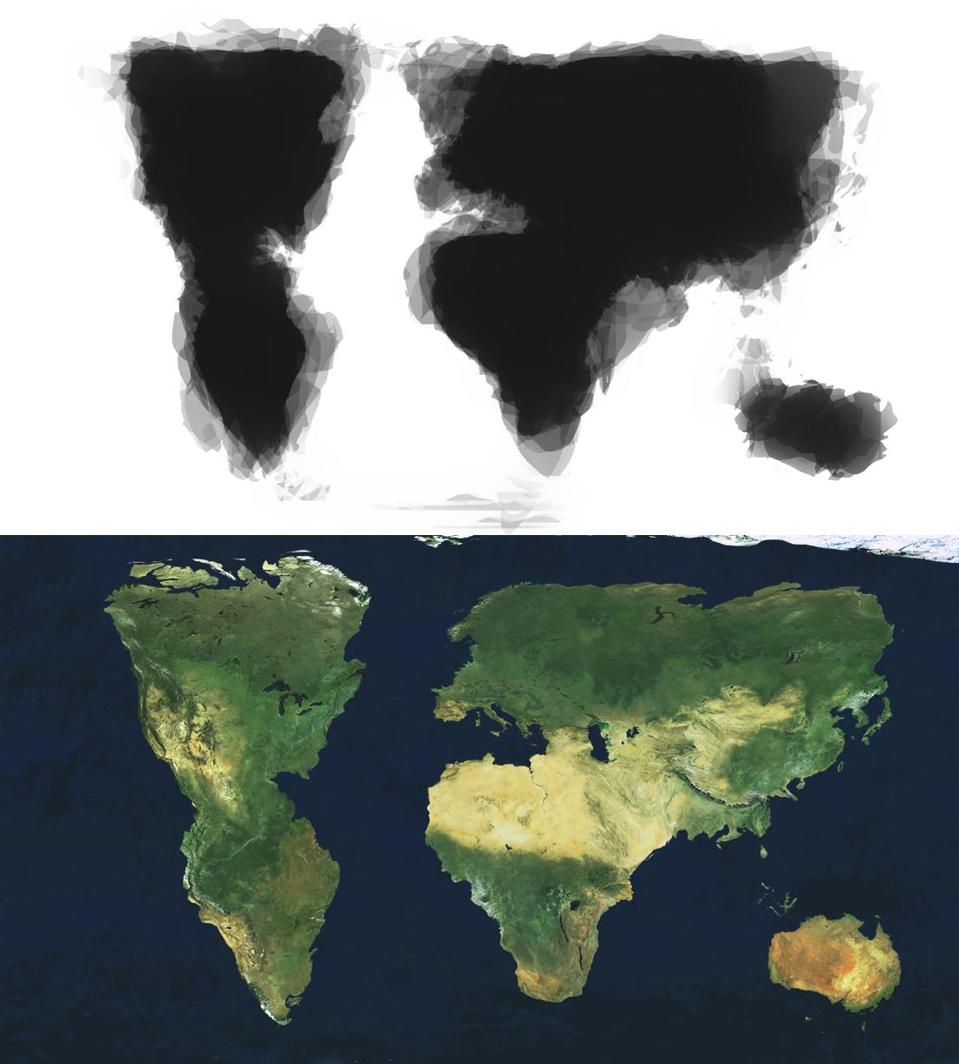 I hope this has shined a light on how geology affects our interpretation and understanding of the world map. Geology has shaped political boundaries, speciation, climate, humans, and just about everything else on this planet. Next time you look at a map of the world you’ll be able to have some insight into the underlying information that is hidden below the surface of a map. Maps hold a special meaning to many people, whether they are maps of their neighborhood, their favorite hiking trail, the outline of their home state, or their next adventure. I challenge you to draw the same map above from memory and compare it to the satellite image of Earth to see how close or far off you are. Did you get more or less detail than the combined 30 participants above? Did it change your perception of your place in the world and how centric our view can be at times?