They say tiny drops of water makes a mighty ocean. The story of 5-year-old Taju started as a comic relief and now, he’s found his way to getting the care and empowerment him and every Nigerian child deserves.

Taju who can be said to possess a strong personality appeared to many as a hilarious kid when a video of him unable to state his age clearly in English went viral.

The five-year-old became a viral sensation on the internet when an individual, @elamefa posted a video of the young boy on Instagram.

In the one minute video, Taju was asked what his name and age was, but the lad only knew how to pronounce his name and nothing more- he also could not mention the name of his school because he is not even in school.

Elamefa Dayo, who is a comedian, posted the video for the fun of it and in a few minutes, he got the internet asking questions, who is Taju? Where can we find him? How can we send Taju to school? Taju immediately got celebrities like Don Jazzy, Mo Abudu and Falzthebahdguy interested in his case as they began pledging to donate to his cause. Don Jazzy even promised the young lad the sum of five hundred thousand naira 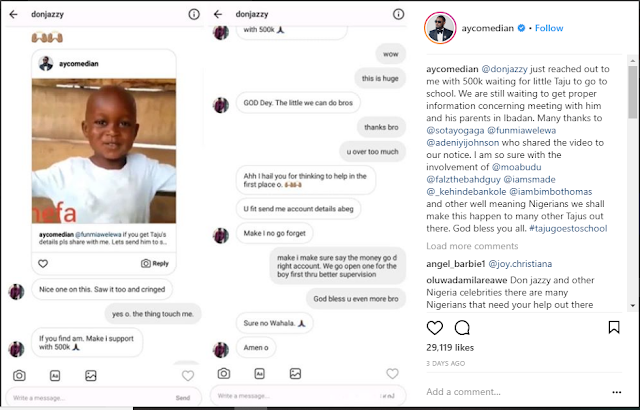 Taju has since been brought to Lagos by Yoruba actress, Funmi Awelewa who took it upon herself to find him and bring him to town.

He also met with comedian AY in Lagos on Thursday, June 14, and the comedian has reaffirmed his promise to take him off the street and give him proper education, a #Tajugoestoschool project for the 5 year old has begun. 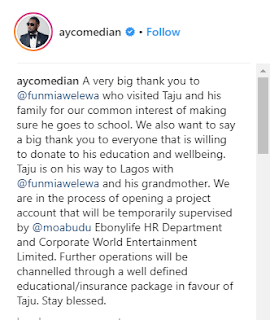 While in AY’s office with his parents and actress Awelewa, Taju was asked his name which he answered and when asked of his age he reinstated that he does not know what they are saying he instead asked to be given cheese balls which he pronounced wrongly.

If you are out there thinking that dreams don’t come true, let the story of the five-year-old boy named Taju inspire you today.

Let meet @elamefa the guy who posted Taju's Viral video, Taju's dad and his neighbourhood Mother figure who has been there for him since the mum left his dad. Thanks to everyone of you in support of Project Taju Goes To School.. @elamefa is a comedian based in Ibadan. He is more than happy for Taju. we are also happy to encourage his career in the comedy business