Wilson Oghenekevwe Oruma, former Golden Eaglets captain and Super Eagles midfielder, has opened up on his travail in the hands of fraudsters, who duped him about N2 billion in his bid to establish himself after retiring from active football. 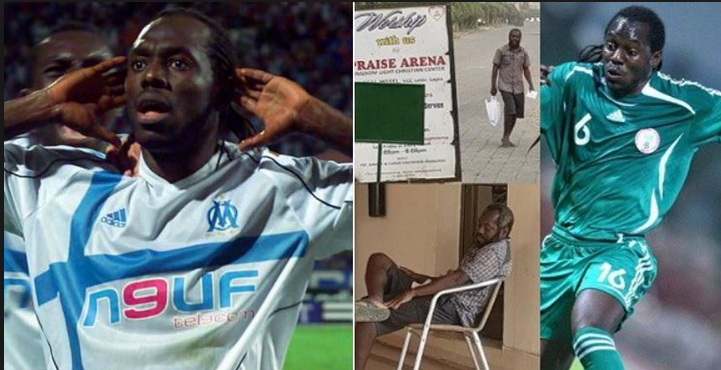 Oruma led the Eaglets to capture the FIFA U-17 World Cup at Japan ’93. He went on to help the U-23 team to win gold medal at Atlanta ’96 Olympics. In his attempt to establish a business empire for himself after his retirement from active football, Oruma ‘walked’ into the hands of some fraudsters, who claimed to be in possession of some oil blocks they wanted to sell.

The two times African Nations Cup bronze medallist pumped his investments across Europe, also withdrew his life savings for the ‘oil business,’ not suspecting any foul play. Things soon turned out to be a fraud, and since then, Oruma had not been himself. The once celebrated Eagles star lost his mind for about two years. At a point, there were media reports that the Delta State indigene was battling with insanity.

In his bid to bring Oruma back from his misfortune, the President of Nigeria Football Federation (NFF), Amaju Pinnick, included him as part of the Nigerian contingent to the on-going FIFA World Cup in Russia, to enable him mix up with people from different parts of the World, particularly his former colleagues in foreign clubs. The idea paid off, as Oruma says he is grateful to the NFF boss and his board members. He also thanked Nigerians for their prayers and support during the time of his difficulties.

However, Oruma has sent words to those behind his travail to consider his condition and return his money. “This is my first time of speaking with any journalist on this,” Oruma told The Guardian at his Park INN Hotel in St. Petersburg shortly before he departed for Nigeria. It is true that I lost all my savings to some people, who turned out to be fraudsters. I have read several stories in the media since then. Those stories did not emanate from me. They quoted different amount, which is not correct. I lost close to N2 billion.

“The most painful aspect of it all was the fact that some of my relations were involved in the deal. You can imagine losing such huge amount of money to people you trusted. I pray for them to have a human heart and return my money, even if it is part of it. That is my prayer every day, and I know that one day, the hand of God will torch their hearts,” he stated.

Oruma, who played club football alongside the likes of Frank Ribery and Samir Nasri in his days at Olympique Marseille FC of France is pleading with Nigerians to give Amaju Pinnick another term in office to enable him position the nation’s football very well.

“I know that many Nigerians are not happy with the way the Super Eagles crashed out of the World Cup in the first round, but I want people to realize that Amaju actually tried his best for the team. For the first time in the history of Nigeria’s participation in the World Cup, there was no complaint from the players and their coaches on issues concerning payment of bonuses and allowances. There was no problem between the players and the NFF, and that is because Amaju was able to think ahead, worked hard to get sponsorship from various quarters.

“In my playing days, most times, we returned home from a major competition without any kobo because those in the NFA then will say there is no money. Sometimes, we get half of what was supposed to come to us, and sometimes, we don’t get at all. But Amaju has been able to change all that, and I want football-loving Nigerians to look at his positive side. He has taken care of many ex-internationals, and it is a big plus for our football. In life, no one knows everything. There may be some mistakes somewhere, but the Amaju I know is ready to make amend for our football to grow bigger. Stopping him from continuing in office might affect us internationally because Amaju has placed Nigeria high at both the CAF and FIFA.

“Maybe, the area Amaju needs to concentrate more efforts is the Nigerian league, particularly the issue of officiating. I have taken my time to attend some of our league matches, and the main problem has been officiating. The local league is the bedrock of football in any country, and he needs to channel more energy into it. But he needs the support of all Nigerians to fix it,” Oruma stated.