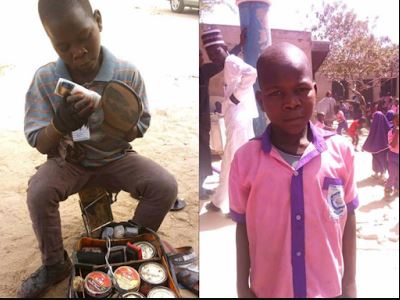 Ibrahim Bukar, who resides in Borno state with his father, and earns a living by cleaning, is said to have outshone his classmates in Future Hope Private School in London Chiki area of Borno State, after being enrolled in the school by a good Samaritan, Ibrahim Yusuf.

Mr. Yusuf was moved with sympathy after he found the 12-year-old boy, said to be the breadwinner of his family and found wandering the city looking for shoes to clean, told him his story.

According to Daily Nigerian, the boy’s father was excited after he was told his son will be enrolled in a school. 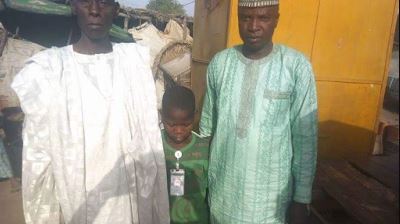 “The boy took us to their house in London Chiki, but unfortunately the father was not at home. We were told the father is a trader around Custom area, so we decided to go and see him in his place of business.

“On reaching there, the father was not around also, but his goods were there on display and his business neighbours told us he went away, but will be back soon. We waited, and while waiting for him, I got to understand why he could not send his boy to school.

“We waited for about 45 minutes, and throughout the time, nobody came to buy the beans and the millet he was selling. When he eventually came back, we greeted him and informed him about our mission there. “The man almost burst into tears, he told us that he had wanted his children to go to school, but unfortunately he can’t afford to.

He told us that before the insurgency became worse, he had sent the boy to Almajiri school in Dikwa, but when boko Haram took over the place, the boy escaped and came back to Maiduguri.

“With the support of a philanthropist and my little effort, Ibrahim is now in Future Hope private school in London Chiki area of aiduguri, and so far he is doing very well. I visited the school today (Friday) to see for myself how he is doing.

“His teacher informed me that Ibrahim is already performing beyond expectations. She told me that he said he wanted to be the best student in the class, and every evening receives extra lessons from one boy in his neighbourhood.

Ibrahim can now recite the English alphabets from A to Z, just within one week. His is outshining his classmates,” Mr Yusuf said.

The school’s headteacher who spoke to newsmen, also disclosed that a decision to promote Ibrahim every year according to his level of comprehension, and receiving crash lessons to make up the skipped classes has been taken.